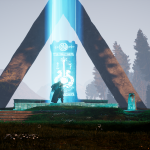 The Viking era of history might possibly be one of my favorite settings for a video game. The amount of history, mythology, and social culture that separated the Vikings from every other European culture during that period is incredible. When I first saw Song of Iron, I was immediately interested in its unique gritty art direction and side-scrolling hack and slash action. Impressively, the game was developed by a one-man team. While this has become more common in recent years. It is still an incredible feat when a single individual decides to embark on developing a game on their own. But many players only care about how fun or interesting the final product is. After completing Song Of Iron, I certainly have plenty of thoughts about the game.

The Battle of Storytelling 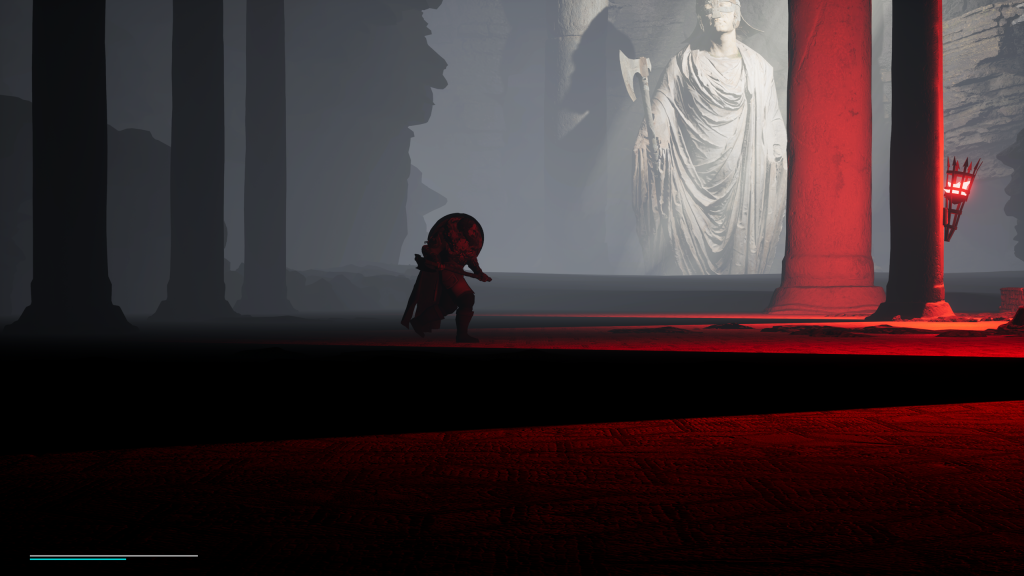 The game starts in a traditional Viking fashion. Your village is being burned to the ground by hostile forces. Within a minute you realize that the invading force has killed your partner. This sets you on your path of revenge. Song of Iron lets you choose the gender of your character right from the very beginning. This is a great option for players who want to feel more attached to their Viking warrior. And historically, Viking women were just as, if not more, vicious than the men. This feels like a brilliant nod to not only Viking history, but also gives players options to make them more attached to their character.

However, with this being said, I found it very hard as I played through the game to develop any form of connection to my character. While Song Of Iron does not have any voice acting, that is not detrimental to the game. As plenty of smaller games, especially RPGs, don’t have voice acting. However, your character is completely silent. He or she will simply sit there quietly and the characters you are conversing with will carry on the conversation like you responded to them. It ultimately made it feel like every character you encountered was monologuing to themselves and then would violently attack you. Having the player’s character have written lines would have made for a more immersive experience and give more personality to the story.

While your character may be silent, one thing that is not silent is the music. I cannot speak enough about how phenomenal the soundtrack and sound design of Song Of Iron is. From deep traditional Nordic vocal tracks during battle to ominous tones as you delve into deep tunnels filled with goblins. The soundtrack completely sets the tone and makes Song Of Iron feel like you are playing a Norse folktale.

The sound design is meaty when engaged in combat. When you throw your ax into an opponent’s head it makes a satisfactory thud. Every time you swing your ax or shoot your bow, whether it hits flesh or an opponent’s shield you will feel it. It is not often in an indie game do I find myself in love with its sound design. But Song Of Iron delivers in bunches when it comes to the audio delivery.

The audio complements the stunning art direction almost perfectly, as you fight across a wide variety of landscapes. From the deep underground lairs of goblins and trolls to the high mountains of dragons and gods. The sheer variety of landscapes you will explore in Song Of Iron is phenomenal. I never found myself getting bored with an area. They changed so frequently it always felt like you were exploring a new region packed with unique enemies to battle. Song of Iron has incredible lighting, shadows, and just overall detail within the world. When the wind blows through the landscape, you see the trees and their leaves sway. All of this happens while the shadows react to these movements as well. It is clear that the developer cared deeply about creating a realistic and beautiful world for players to explore and battle through. With beautiful landscapes and a pulse-pounding soundtrack, there is only one aspect left that could make Song of Iron an instant classic, and that is of course the gameplay. Unfortunately, this is where Song of Iron is ultimately at its weakest. 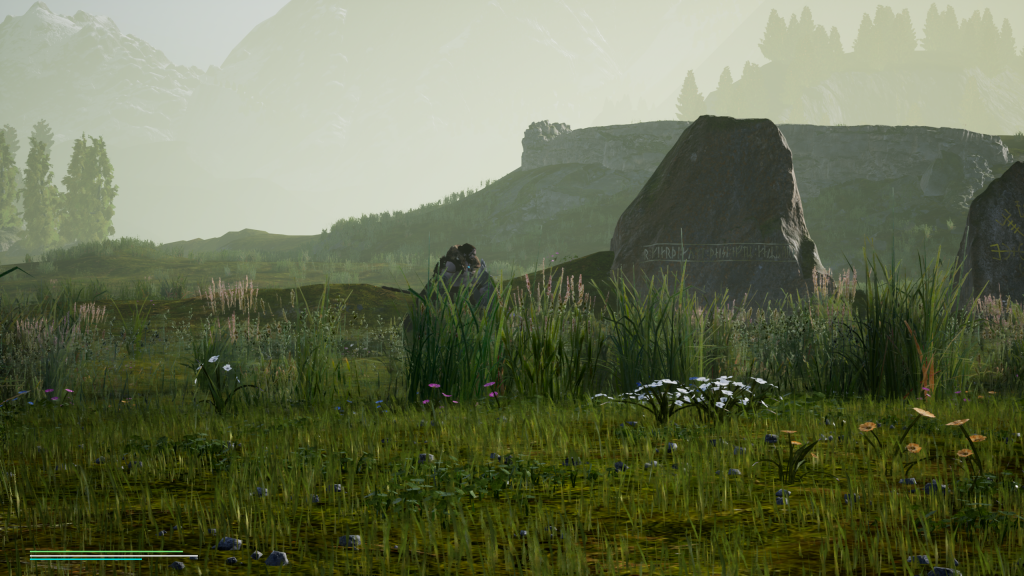 There are different options that players can exercise to kill the wide variety of creatures and soldiers they encounter. From axes, swords, shields, and of course your trusty bow, there is no shortage of tools at your disposal. Even with all this variety, the combat is incredibly forgettable as most enemies will simply fall to a handful of ax swings. Through the first half of the game, many of your enemies you can hit and kill before they even manage to swing at you. While the game begins to open up different powers and abilities later in the game. 90% of enemies in the game can simply be hit with your basic ax hit a handful of times and they will perish. This practically renders the various powers nothing more than stylistic additions. Thus, adding very little depth to the actual combat. Making a basic enemy die in 2 hits instead of 3 hits when the enemy’s single file run at you, simply isn’t engaging. Most of the boss fights were simply roll and dodge the boss’s attack, then attack once and repeat.

While the combat has variety in its options, the game doesn’t put you in situations where it feels natural to use them. I basically forgot about them in most of my enemy encounters which is ultimately disappointing. While Song of Iron visually has a wide variety of different enemies for you to face, they all ultimately feel the same in combat. Most enemies will simply run up to you and try to either fast slash at you or charge up a heavy attack. The combat, simply put, is not engaging unless you constantly push yourself to do something cool for the sake of it being cool. Even then, stringing combos together is simply not intuitive and feels like a waste of time. While a simple three-hit smack is enough to kill them. 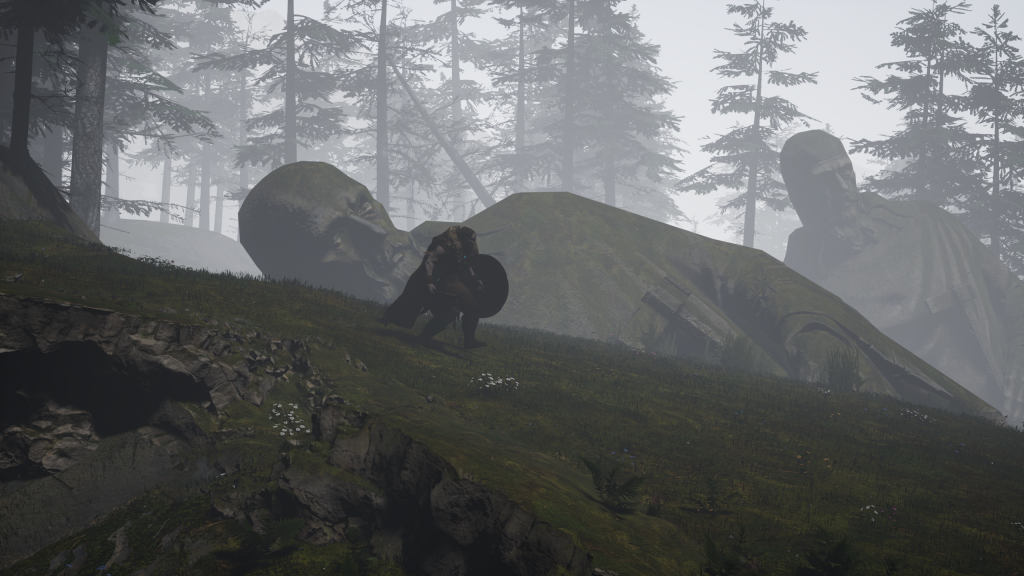 On top of this, the controls in general just feel muddy and overly weighted. While I understand many developers are trying to design their characters to have “weight” to them. However, it’s a very thin line between muddy and realistic-feeling controls. What absolutely makes the controls feel awful is the platforming sections in various levels. Which by far were my least favorite moments of Song of Iron. In the beginning, your character is slow and sluggish. Yet, later on, you unlock a powerup that allows you to speed up in short bursts.

However, when you speed up in order to do some of the later platforming sections, control issues become even more apparent. When you jump to grab a ledge and you complete the animation but then drop to your death anyway. Another example is when you try to leap across a gap, it feels like there’s no consistency in your jump distance. Some of the platforming sections have such a tight timeline in order to dodge all the hazards, you will find yourself hampered constantly by the controls.

Song of Iron suffers from one of the most consistent criticisms I have with games. If your controls are not tight and precise, please avoid platforming sections. 99% of my deaths were from some of the later platforming sections. It was obvious that the margin of error was slim and my character simply did not react fast enough. This was also compounded by actions simply not registering. Trying to jump up to a ledge and my character would simply bounce off the ledge instead of scaling it. Sometimes it would take upwards of 8+ tries for him to finally grab the ledge and pull himself up.

Song Of Iron Respects Your Time

Song of Iron is by no means a long game. I completed the game in just around two sittings for a total playtime of around 4 hours. Which for some may be a little on the short side. However, I enjoyed the pacing of Song Of Iron because it simply avoided time filler. The story moves along at a decent pace. Which honestly in an era of 100 hour plus games, feels refreshing. The game is incredibly linear while there are some cool easter eggs that you can find off the beaten path. Ultimately, it’s an incredibly straightforward adventure that you can turn off your brain and play. Even though the game runs a bit on the short side, it is important to note that it retails for under $20.

In the end, Song of Iron gives players a beautiful world that is enriched with enchanting music and effects. But ultimately the game falls short. It is hampered by its controls in both combat and platforming which will likely frustrate many players. The story feels like an afterthought, and honestly had so much potential with the setting, but it misses the mark.  The game could have benefited from the protagonist having actual lines of dialogue, or even dialogue choices. This would have lifted Song of Iron to another level. With all the criticism I have of this game, admittedly it certainly was a solid effort. I commend the developer for making such an ambitious title. I look forward to seeing what he is able to build on and improve with his next title.