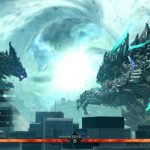 You are reading
Bayonetta 3 Review – Style, Hold the Substance

Ever since Bayonetta 3 launched there has been a concerning amount of discourse surrounding it. As the talk is not just about how this third, and hopefully final entry delivers a grand finale. But instead, question the quality of the game’s storytelling, when in reality, Bayonetta 1 and 2 never had an impressive story. What they achieved in the previous entries is, instead, amped up to eleven in this game. Familiar charming characters, action-packed set pieces, unbelievably satisfying combat, and thrill rides galore paced nearly perfectly. Since once I put my foot on the gas, it was almost impossible to stop. Leaving me satisfied outside of a few huge speedbumps and some haze along the way.

Fly Me to the Moon

Bayonetta 3 starts as every game does. The protagonist, Bayonetta finds a new enemy faction starting a catastrophic event for her and the earth. From there it is up to her, and her companions both old and new, to stop the threat before it’s too late. The plot is as basic as ever but is carried, as always, by the charm each character radiates. Bayonetta takes center stage with her never faltering swagger. While you also get to play as her companion, Jeanne in bite-size side-scrolling missions in between the bombastic story missions with Bayonetta and the newest character, Viola. 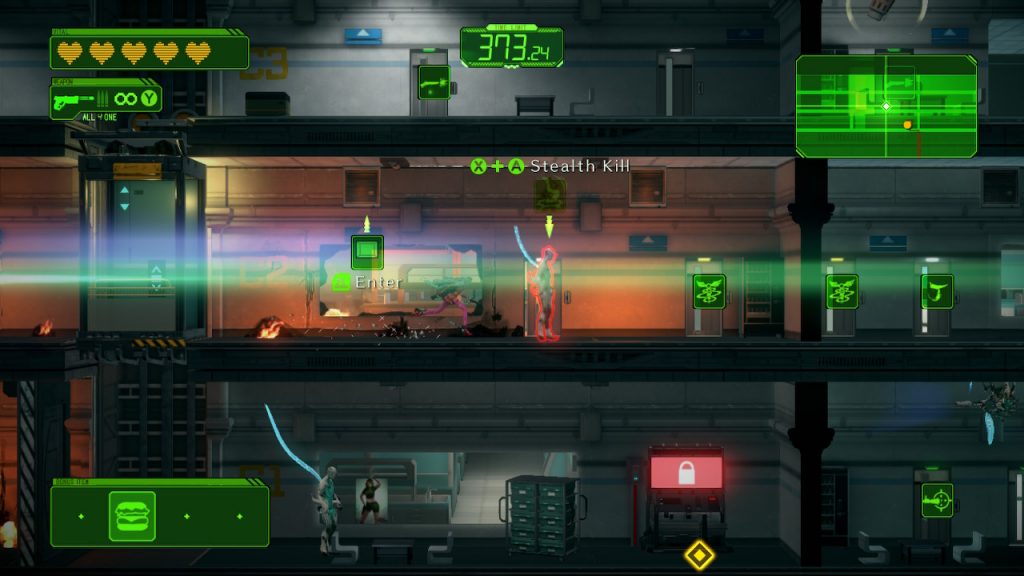 However, Viola is sadly not as great of a character as she could be. Which is laid bare during missions where you have to play as her. I could boil down her character design, writing, and even her voice acting as the epitome of “it’s not a phase, mom”. Playing as her always felt like the lowest point of the game since Bayonetta, even in the first game, is fully realized and does not need to do much for me to adore her presence in the story. While Jeanne barely speaks in hers as she radiates this aura of “less is more” that does not give me the opportunity to dislike her place in the story. 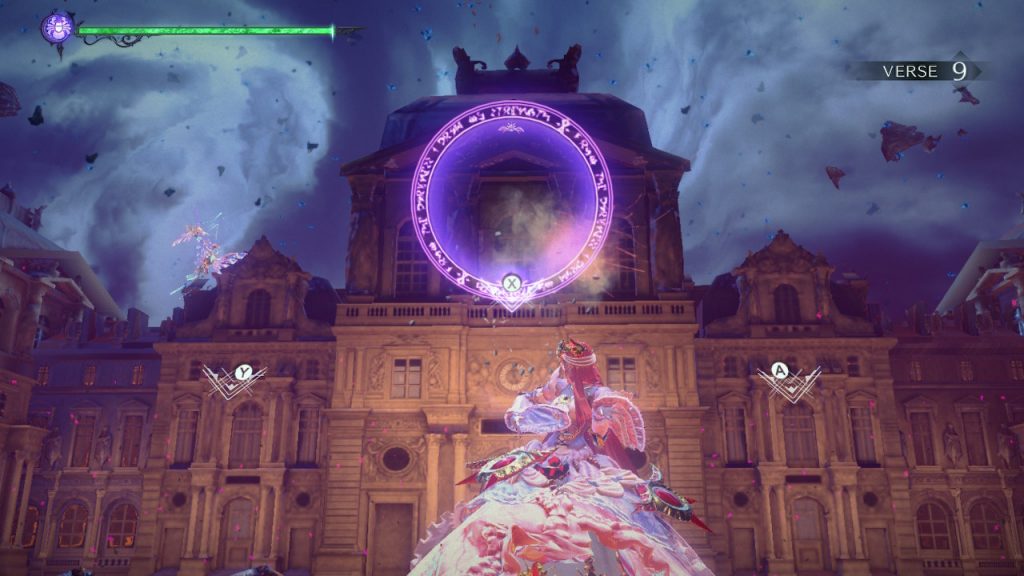 The way each mission for every character is carried out is also similarly linear to the previous games. Giving it the opportunity to stuff as many battle scenarios as possible. As well as crazy over-the-top set-piece moments that blew me away with how cool they were. Like an early point in the game where you fight a giant monster, as a giant monster. Every mission with Bayonetta always ends with one of these segments and it is always so much fun.

Even Crazier Combat in Bayonetta 3

Alongside the seriously crazy and fun boss fights are a similar amount of ways to fight and play in Bayonetta 3. In the previous games, there were experiments with weapons you could buy or find to spice up the gameplay. But in this game, Bayonetta goes from the normal punching and kicking with gunplay mixed in. All the way to having fiery yoyos that at the end of the combo turns you into a spider. As well as a giant sword 3 times her size that turns into dual chainsaws halfway through and ends with it turning into a train. 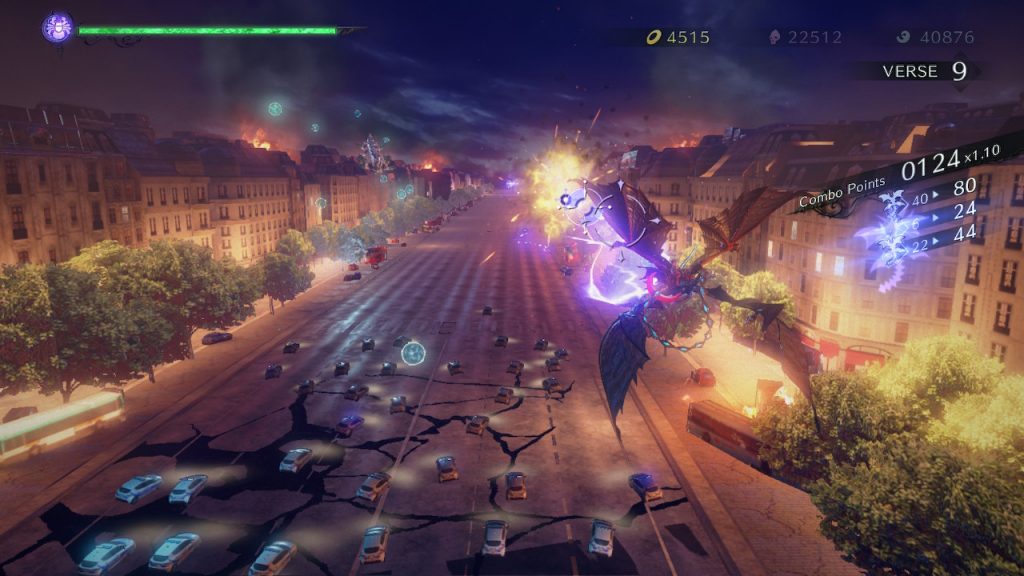 Suffice it to say, that it keeps on getting crazier. Especially with the highlight of the gameplay being that you can summon giant monsters to fight with you. Depending on how you play, it can be a way to spice up combos while dealing massive amounts of damage to enemies in a sweeping fashion. But you can also stay in place and control them for a time. While this is a neat feature, the monsters move way too slowly to allow Bayonetta to get hit. But I do appreciate the option to go either way with this element to combat. Being able to summon something in the middle of the combo always felt fun and fluid.

The monsters also have a great variety to them but do not get properly used for story purposes. The spider can climb on walls but I can not remember a single time I found that useful. While in comparison the train needed to kill multiple egg things in one combo to progress. Bayonetta 3 also has some optional battles to take on in certain locations. Fighting angelic enemies can earn you currency to buy some cosmetics. While trials can earn you extensions for your health and magic that allows you to control demons longer. 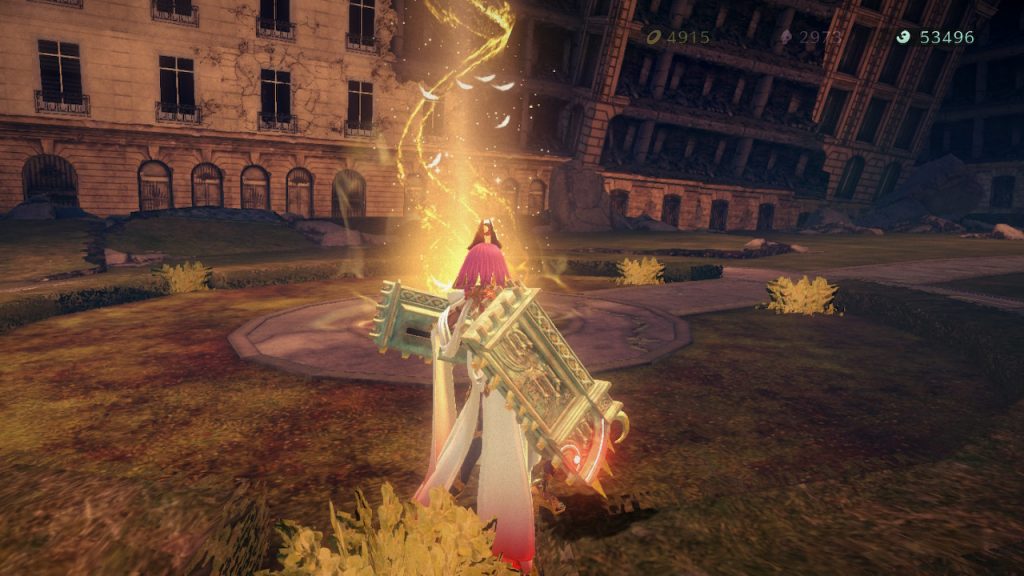 I always enjoyed the trials but felt that some could be unfair at times. Especially the ones that require you to not get hit a certain amount of times. As they always force you to avoid certain zones with enemies that use precision attacks. However, I always found the health and reward extensions to be more than worth the small frustration.

We Need to Talk About Viola

After two installments with Bayonetta as the protagonist, forcing me to play as a new character needed to feel as good or better in Bayonetta 3. Sadly, Viola does not fit the bill. As her dodge feels like a lighthearted dash. As well as the Witch Time being tied to her block instead of the dodge, which always threw me off. While it also frustrated me since every time I pulled off Witch Time with Viola, it did not last as long as Bayonetta’s Witch Time. 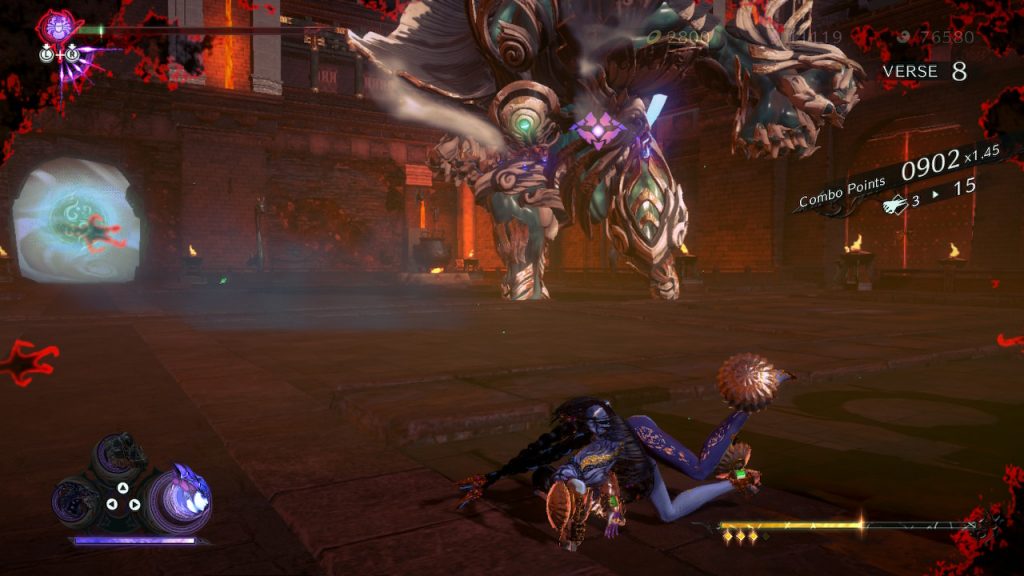 This felt like a step down altogether since the bosses she fights are way faster than the ones Bayonetta does. It isn’t all bad since you can fight alongside her own personal monster in a more fluid manner than Bayonetta can. But this is the only upside to her gameplay. If the story continues with Viola, then her gameplay needs to be more refined, alongside her character.

As Bayonetta 3 is on the Nintendo Switch only, it should be expected that the technical side of the game is abhorrent, to say the least. When you’re fighting in the game and navigating through every level, it does hold a somewhat stable sixty frames per second. But in cutscenes, the menus and some boss fights the performance takes a nose dive. With combat scenarios having more going on screen than in cutscenes I thought things would be smoother. But this was a jarring subversion of expectations. 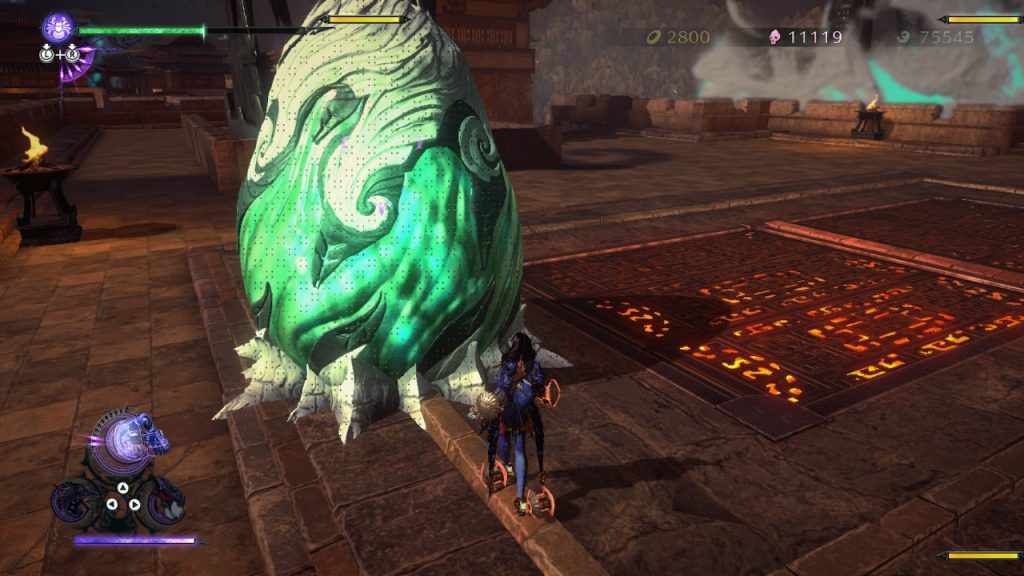 The game is also very blurry almost the entire game which would not be noticeable in handheld mode. But alongside this are disturbing levels of pop-in. Parked cars within twenty feet of Bayonetta would spawn into existence as well as grass or bushes. Additionally, giant egg things are used in an early puzzle of the game. If you walk over to any of the eggs, you can notice little black dots on them that I know are out of place. It was sad to see so little care being given to the game’s visual polishing for little details like that. 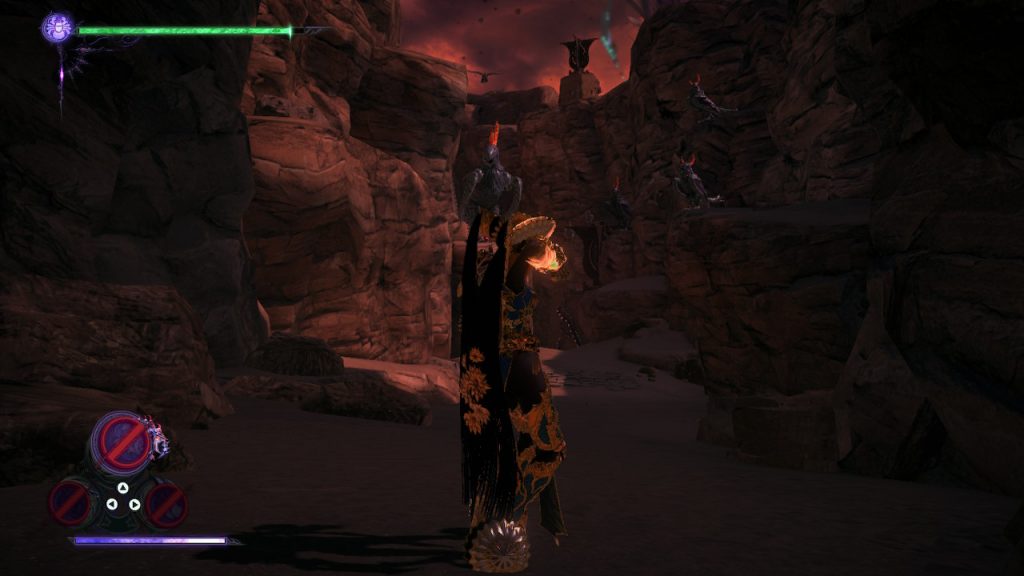 The music is also very forgettable. I only recall the music used in Jeanne’s levels that were spy themed. Giving it a mock James Bond atmosphere. But I will give credit to the game’s art direction. The monsters both friendly and enemy are incredibly well-designed and colorful. Every level never felt the same. you could have an Egyptian-themed level or Paris and it would look fantastic beyond the blur and jumpscare cars.

Bayonetta 3 is a great joy ride and one that feels like a great stopping point for the series. However, more care could have been given to the game’s technical side. It feels very rushed, especially with how Viola felt to play. I would still find it difficult to critique the game’s story as a game that allows you to summon latex-wearing giant ladies or turn into a train are goofy enough to keep me invested far beyond any grand level of storytelling the series could’ve had. Bayonetta 3 despite any shortcomings, I can still easily recommend it for its amazing gameplay and thrilling set-piece moments. It is what this game as well as the series has always done best.

Bayonetta 3 is available now on the Nintendo Switch for $59.99.

7
A Fun Yet Undercooked Finale to a Great Series.