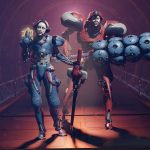 You are reading
Warframe Crossplay Test Comes To Switch And PlayStation

Service games need to always be constantly evolving in order to offer their audience new experiences. Whether it’s new features, new content, or weapons to grind for. There are very few games as evolving as Warframe. Digital Extremes has been adapting and evolving for almost a decade since Warframe was released back in 2013. Now it appears Warframe crossplay features are going to be a big focused push for the end of 2022.

Warframe Crossplay For All

In an update posted on the developer’s forum earlier today, it was revealed that PlayStation and Nintendo Switch players would be able to join in Warframe crossplay testing. This feature is relatively new to the game, as Xbox and PC first received access to testing back in September of 2022. Now Xbox, PlayStation, Nintendo, and PC players can all join each other through the Origin System. This is a big update to close out 2022 for Digital Extremes as they have been working on crossplay features plus feature content for the majority of 2022.

It appears that they won’t be stopping anytime soon as within the forum post the developers state that after crossplay is fully released they will be turning their eyes to cross-progression. With a game so focused on gear, armor, and leveling, this would be a massive step for the game. Imagine being able to turn off your home console and then picking up your Nintendo Switch to take the game with you on a train ride or trip. The future is exciting especially with features that bring communities together and tear down the barriers of which platform you choose to play on.

What do you think of Warframe crossplay coming to Nintendo and PlayStation? Let us know in the comments and don’t forget to check back for the latest gaming news and information.