What a weekend. Another Stage Playoff spot has been clinched, and an amazing Map 5 has thrown the rest of the playoff picture in the tumbler. It won’t stop spinning until next weekend, when five teams will come out into the Playoffs. For now, let’s see who set themselves up for better and for worse this week.

Division Leaders – If there is any a stat to show how far away the NYXL & Vancouver Titans are from the rest of the pack, look at their map differentials. The XL finished the Stage undefeated with a +16 differential and the Titans aren’t far behind with a +14 map differential. While the Titans still have a match against Guangzhou left to finish off Stage One, they still have their division locked up and at least the two seed in the Stage Playoffs. All of this means that if the Titans win next weekend with at least a +3 differential (3-0-1 or complete 4-0 sweep), they’ll be the first seed in the Stage One Playoffs.

Toronto Defiant – Toronto is the first, non-division leader to clinch a Stage playoff spot after beating Chengdu and Hangzhou by a combined match score of 6-1. The Defiant finish the Stage at 5-2 with a +5 map differential, so while their official seeding is dependent on Week 5 matches, they can breathe easier than most teams heading into next week knowing that they get a week off and no worse seeding than #6.

Week 5 Matches – Of the 8 matches next weekend, at least 6 have Stage Playoff implications, and they are:

Further, there are still five Stage Playoff spots up for grabs. Even with half as many days of matches this weekend, this is going to be the first sampling of the play-in between seeds 7-12 at the end of the regular season. Prepare for chaos!

London Spitfire – This was not the week to drop a Map 5 after giving up a back-cap, albeit that was an amazing Map to watch. London is now sitting out of the playoff picture, in a must-win scenario against Seoul, and needing help from Vancouver to knock Guangzhou out, and even that doesn’t bring the map differential tie-breakers into consideration. All will be revealed next weekend, but Stage One is not looking like the Spitfire’s ideal outcome.

Paris Eternal – Atlanta seemed to be more than just a bad loss for Paris. Much like Hangzhou started doing earlier this season when they lost to Houston, Paris has now been blown out of the water and well out of the playoffs. Since starting the season 2-0 with wins against London and the LA Gladiators, Paris has now gone 0-3 in matches with a 1-11 map record. To be fair, their later Stage schedule did them no favors, but the moment they started generating buzz was followed up with a string of curb-stompings that has bled them dry.

Day 2 Losers – There’s losing and then there’s thrashing. Every losing team on Day 2 of this weekend lost 4-0. While two of these shutouts came at the hands of New York and Vancouver, they do not help Stage standings whatsoever. Of the teams that lost in such a manner, the only one not kicked out of the playoff picture was San Francisco because they went into that match with a 3-2 record, and righted ship to end their Stage One play at 4-3 with a +5 map differential. As mentioned above, Paris did not get as lucky and will miss these Playoffs, and Shanghai, while ending the stage with a win, could have been in contention had they not blown multiple maps they should have won (see Nepal).

In a meta of Tanks and Supports, be a Jinmu, and go Hanzo. More importantly, be a Jinmu, be a Hanzo, and go off on Volskaya. 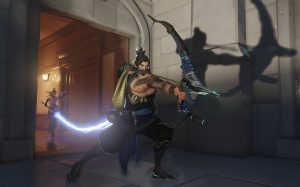