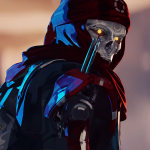 You are reading
Assimilation is an Excellent Birthday Celebration

Whoever predicted a Battle Royale based in Titanfall lore would be 2019’s surprise hit is clairvoyant. One year ago on Tuesday, Apex Legends took the video game industry by storm, and despite coming out of nowhere, everyone played it week one. One year later, the game looks wildly different. Not only is King’s Canyon not the main map anymore, but the newer map changed. We are now in Season Four, Assimilation, which released on Apex’s birthday. Respawn Entertainment brought changes with Assimilation, as well as new things, primarily a new hero, Revenant.

The World’s Edge is Even More Chaotic

Much like Respawn did in Season Two, Battle Charge, World’s Edge is a scarred map. Due to the Hammond Robotics’ behemoth Harvester device, the World’s Edge is gashed, and Capitol City is split in two. Capitol City’s destruction leveled buildings, creating a makeshift bridge over the crevice. The ruined city’s broken walls create fluid transitions from close range to long-range combat areas.

Hammond’s multi-tiered Harvester acts almost like a lighthouse for the map. As the tallest building on the map, it shoots a red beam from towards the sky, easily seen across the map. The Harvester’s main hub sits over a lava river, which causes a natural jump tower a la the geysers further east. Design director, Jason McCord, talked about the Harvester in a blog post, explaining how it brings directionality to the map and predictability to third-partying.

Revenant, Apex’s Grim Reaper, and not Forge are legitimate nicknames you can call the new hero. Assimilation’s new hero is an agile assassin, best displayed in the season’s new cinematic. His character bio called Revenant an amazing hitman. However, the veil faded, and he realized he’s a robot. As a hero, his kit is built for quick kills. For example, his passive ability lets him navigate faster, his active ability disables opponents’ abilities, and his ultimate respawns him and his squadmates if they go down. This hero has Bloodhound’s aggressiveness with Pathfinder & Octane’s navigation abilities.

Like most seasons, Assimilation introduces a new gun. This gun is the Sentinel sniper rifle (speaking of, sniper rifles are their own category now with their own ammo type). It’s a bolt-action rifle and can be charged with a Shield Battery. When charged, the gun glows electric blue, fires blue streaking rounds, and does extra shield damage. The more I think about charging your weapons, the more I could see it in already existing weapons.

Apex’s competitive mode also got updates. There are some major changes that arguably got overshadowed by Revenant. First and foremost, we’re going back to King’s Canyon. Assimilation will spend the first half of the season in World’s Edge, called a split, and the second half in King’s Canyon. Rank Points (RP) will reset after each split.

Next, Ranked has a new tier called Master. It replaces the original Apex tier, and the new Apex tier is the Top 500 players in a given region. Next, party rules are changing; Platinum-tiered-and-higher players can only squad up with same-tiered or one-tiered removed players (ie Platinum can only play with Gold and Diamond players).

Most notably, Respawn is coming after early quitters. Respawn’s Ranked designers explained in a post,

Assimilation shows off everything Respawn is improving. Revenant and Hammond Robotics deepen the universe’s lore, the Sentinel gives players a new mechanic that we might see more of in the future, and Series 3 shows you can’t exploit Apex for long. Here’s to another year, Respawn!