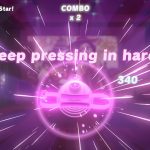 In Nintendo’s March 26 Direct Mini, a free update for Ring Fit Adventure on Switch was announced. The update adds a new game mode, a much-needed feature, and some quality of life improvements.

Press, Pull, Squat To The Beat 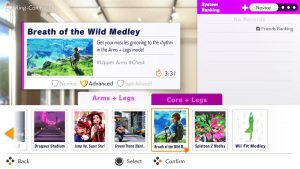 First, let’s break down Ring Fit Adventure‘s new rhythm game mode. It includes a total of 17 tracks from RFA and five other Nintendo franchises. Two from Super Mario Odyssey and one from Breath of the Wild, Splatoon 2, and Wii Fit. Each track comes with three difficulties to choose from plus a fourth unlockable difficulty. The mode plays like any standard rhythm game in which you match the correct action to the oncoming one all in the beat of the tune. Only, it’s done using the Ring Con to work out your arms and legs or your core and legs.

Here’s a sample of how one of the tracks looks while playing. This was set on Advanced (Hard) difficulty:

After playing through a handful of the tracks on Advanced, I was definitely building up a sweat. Pressing the Ring Con against my stomach and shifting left and right wasn’t always my favorite exercise, however. It always felt uncomfortable, so I’ll more than likely stay away from it.

The arms and legs workout is more up my alley and something I had more fun with. Plus, you’ll get some tone after all of those pulls, presses and squats. Nintendo chose some great songs to exercise to from its other franchises as well. Each lasted from a minute to three with BOTW being my favorite. Since RFA is a hot seller, I hope Nintendo plans on adding more songs from other franchises, like Xenoblade Chronicles and Super Smash Bros. 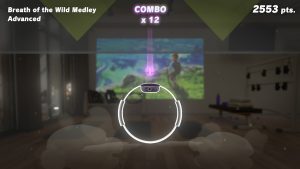 Get Your Jog On

Next, jogging has been added to the game’s Custom and Quick Play modes. Just like if you were putting together an arms or legs workout, you can now build a jogging routine. Just simply choose any location you’ve unlocked in the game, set them up and start. Easy as 1, 2, 3. Using the Switch’s main appeal, I took it off the dock and went to my backyard to do my jog. 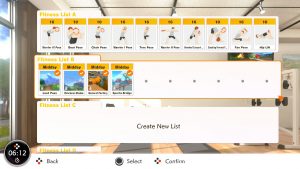 I love RFA’s story and custom modes, but there are just days where I don’t want to do them. Sometimes, I rather just jog or do something else that doesn’t involve my lying on the floor. Jogging is a feature I’ve always wanted, so it’s more than welcome and I plan on using it frequently to build my endurance further. The locations you choose even have an estimated time of completion, so you could plan a 10, 15 or 30-minute jog. Thankfully, the areas you choose to play one after the other with no interruptions.

Lastly, the update gives players the option to choose Ring’s voice language. So of course, being a Boricua, I had to make him talk Spanish. Which, shout outs to the developers for having Latin America Spanish and Spain Spanish. Yes, there’s a difference between the two. However, you can choose a handful of other languages such as Italian, German, Japanese, Chinese, and more.

Since we’re all not fitness gods, there are questions we are bound to ask. Am I eating right? What muscle should I be focusing on? For many of us with those technical questions, the developers added Tip Index, a catalog of common questions we should learn the answers to. As some say, working out your body is only half of the effort. You also have to gain some brainpower! 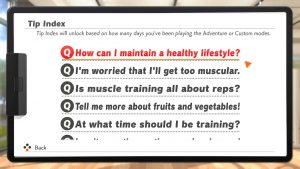 Overall, Ring Fit Adventure has a fantastic and worthwhile update that adds more longevity to the game. It’s the longest that I have stuck with a fitness game, and mainly because it’s fun and I’m determined to stay in shape. The rhythm mode is enjoyable and jogging without doing battles is finally possible. Plus, a Spanish-speaking Ring is just too good.

RFA’s latest FREE update is now available to download. Good luck finding the game though since it’s sold out just about everywhere due to the worldwide suggested-quarantine going on because of coronavirus.

See More: Nintendo Download 3/26: eShop and Deals of the Week