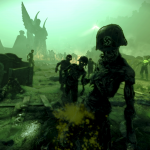 You are reading
Zombie Army 4 Impressions: A Ghastly Delight

It’s difficult to get tired of seeing another Nazi zombie’s head explode from a well-placed sniper round. Zombie Army 4: Dead War by Rebellion studios is a great 3rd person action-adventure zombie game that of course has you going after zombie Hitler again. He and his ilk just don’t seem to go away, do they? It doesn’t help that Hitler is some sort of evil demon that keeps getting resurrected by his cronies. C’mon man, just give up already!

The Zombie Army series hasn’t exactly been a “Stand out must-have” title, but Zombie Army 4 really has polished it up. There are quite a few zombie genre games on the market, but none of them play like this one. That probably helps because it is a sniper oriented type of game. Zombie Army 4 really exudes a horror vibe, while keeping it light with old school game sounds. For example, when you find a collectible it makes like an 80’s style arcade chime. Let’s get into the undead meat of the game though. Zombie Army 4 provides you three ways to enjoy the game. 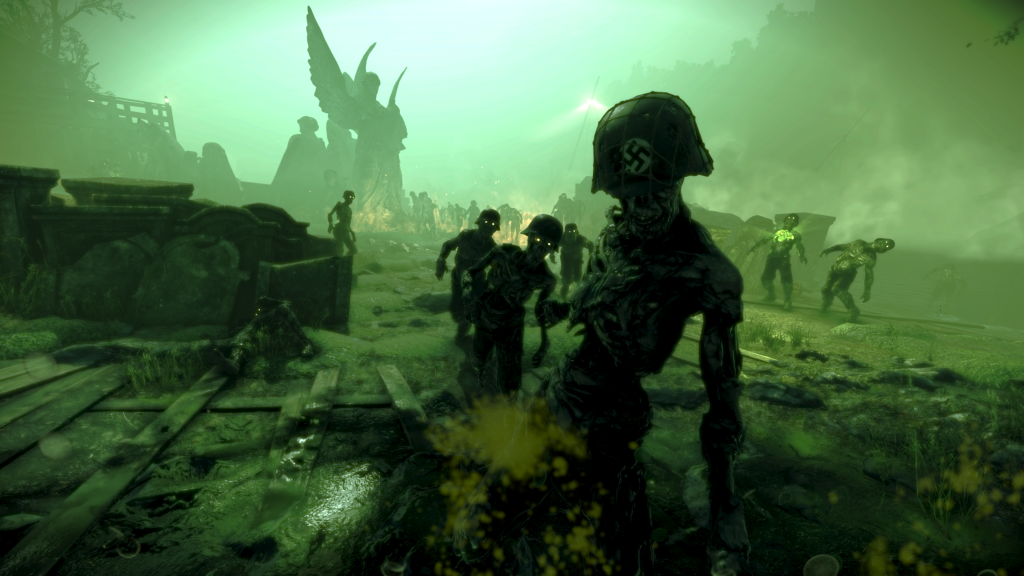 The campaign as always is the bread and butter of all games. Zombie Army 4 has nine missions for you to fight through. Most of them containing four large sections of gameplay per-mission. Only the first and last missions are exempt, with the first having three sections and the final mission only one. The story overall for the game isn’t the most captivating, but it’s just enough to not have the game fall completely flat. You travel your way through Europe destroying Hell Towers, ebbing the tide of nazi zombies. Eventually, you do finally get the satisfaction of putting ultra nazi zombie Hitler back in the grave. The game slowly introduces new zombie types to keep you on your toes. Normally you get the typical zombies, then the three “specials”. Spitters, exploders, and tanks. Zombie Army 4 has those but also a whole range more.

This is a really nice and refreshing take on what most zombie games put out for enemies. I guess considering the game is a Sniper Elite clone, they can add some unique enemies since ranged combat is a big highlight of combat. You’ve got generals that summon suicide zombies, giant armored zombie boys, snipers, screamers and a whole slew more. If this was a first-person shooter, it would easily fit right along in the horror genre. What’s also nice is how you level up your character. We will get into that part of the game a little later though.

Everyone knows what horde mode is for a game. Simply put it is a game mode where you fight endless waves of enemies as it increases in difficulty per wave. You’ve got four levels to choose from and supports up to four players. Luckily in this horde mode, if you reach a certain wave, you can start a whole new match from that wave. These horde mode maps also open up more areas as you make it through the waves. So you are never restricted to just one area to the whole match. Do you dare try to survive the endless waves of zombies by yourself, or will you team up with a crew? 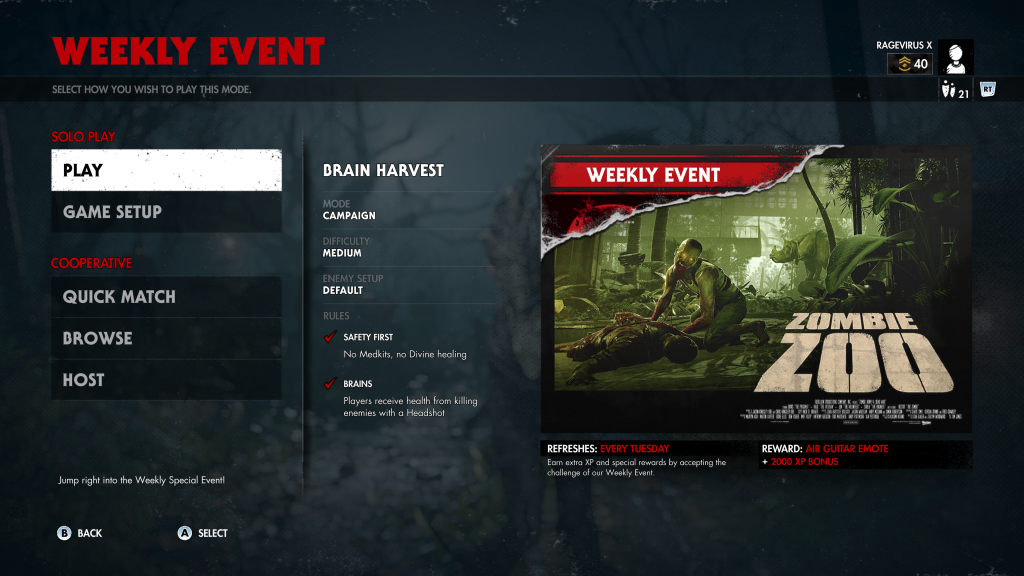 Another nice touch that keeps things interesting and fresh for Zombie Army 4 are the weekly events. This is basically your horde mode but with special restrictions. For example, the current weekly event (as I’m writing this) is “Brain Harvest”. It’s set on the “Zombie Zoo” map, medium difficulty and in the campaign mode only. Default enemy setup with special rules. These rules are “Saftey First”, No medkits, no Divine healing and “Brains”, players receive health from killing enemies with a headshot. These events refresh every week and bring unique rewards along with them. With these three modes to choose from in Zombie Army 4, you can rest assured you’ll have enough zombie-slaying content to keep you satisfied.

Ok, so you’ve been reading a lot about how the game has been enjoyable. It is! Though there are some issues that should be brought up. On my playthrough of Zombie Army 4, I surprisingly did not encounter a large number of issues. The game ran smoothly and did not notice any frame drops. There was no stuttering, audio issues or zombies just acting outrageously weird. One issue that I did actually have, was also a fairly consistent one and a random one at that. Sometimes after firing a single round into a zombie, or coming off a slow-motion kill shot, I would get black bars on the top and bottom of my screen. It was as if the game suddenly decided to go into “Movie Mode” and cut off almost all of my gameplay UI. 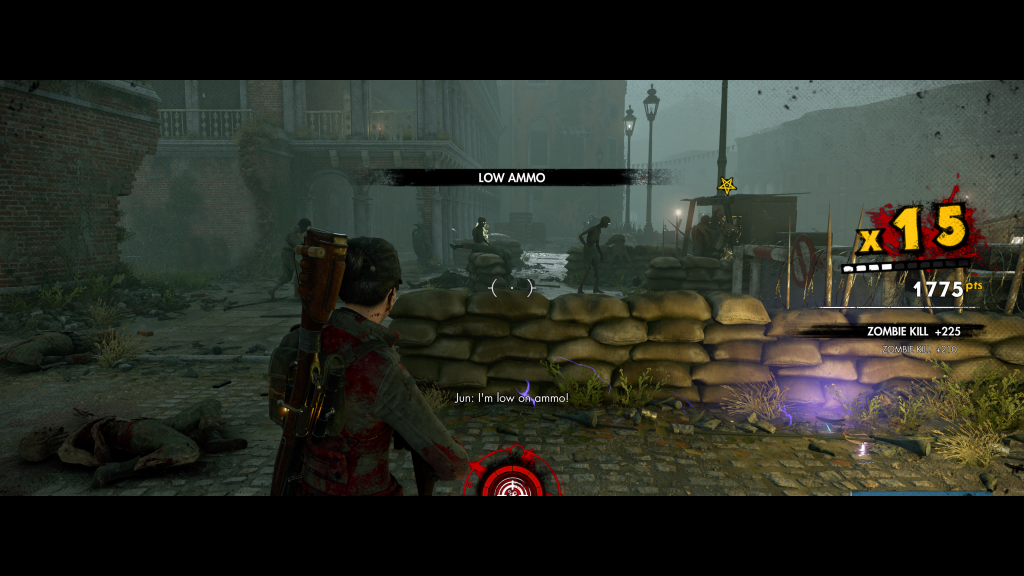 I’m not entirely sure the cause of this issue, but it is definitely the only one that I experienced. I would have to either return to the main menu to get rid of it or be lucky enough that it somehow goes away on its own (which sometimes it did). Outside of this, I’ll reiterate that there were basically no other issues that I experienced. Zombie Army 4 gameplay overall is good though. There is no “overpowered” special zombie, there is no one good weapon, everything seems to have a good balance.

A good testament to the balance is that I did not have to change out my weapon setup at all throughout the whole game. The options are there right off the bat, allowing you to choose from a small handful of rifles, secondary weapons, and pistols. The trench gun, Mosin-Nagant and the Webley MKVI. Not once did I feel the need to change from this setup, allowing me to properly use my upgrade kits all for one setup. The gunplay overall feels fairly typical and not outstanding. If you have played any of the Sniper Elite games in recent years, you’ll have a good idea of what the gunplay is like.

Another great aspect of the game is weapon upgrades and perks! There are also weapon skins, charms, different reticles and some character customization (based on preset characters). The perks and weapon upgrades provide probably one of the few benefits from continuously playing the game. You can transform your trench shotgun into a powerful weapon that has an electrical shock buff on the first round, for example.

The character perks work a bit differently though from the weapon perks/upgrades. Instead of using upgrade kits, you just have to be a kick-ass zombie slayer. They work and upgrade off of what you do in the game. There are three categories of character perks to choose from, each holding twelve different types. Each perk also has three tier levels, bronze, silver, and gold. This is a nice way to give the player motivation to keep going and to play more than just a single mode once.

Zombie Army 4 also kicked it up a notch graphically. The environments are well crafted, with Zombie Zoo being my personal favorite. The enemies themselves are also quite detailed, which is nice to see considering how much goes on the screen at the same time. A game can have good gameplay, but it needs to execute in multiple areas to be truly successful. The environmental aesthetic in Zombie Army 4 definitely follows through in one of the key areas. There were quite a few times where stopping to enjoy the view and have some photo mode fun was necessary.

Zombie Army 4 is a game that you probably shouldn’t miss out on if this is a genre you enjoy. The campaign has a good amount of content that can be played through in a decent timeframe. Alone or with friends, you can’t go wrong. Multiple modes mean multiple ways to have fun, with weekly events always having something fresh to do. Character progression, ranking, weapon upgrades, and perks add a vital need for players to continue their zombie-slaying rampage. I cannot emphasize enough that having a good character progression in certain games is vital to gameplay. The visual presentation is also a key factor, and Zombie Army 4 holds true on that front. There are terrifying zombies, desolate cities and horrific entities to encounter along your journey.

The only true issue I have with the game overall is I wish it stood out a little more from its mother, Sniper Elite. There is a huge chance here to stand out more and take advantage of a genre that people lust for. A good zombie-slaying game can go a long way, especially one with multiplayer and co-op. Zombie Army 4: Dead War overall sits well in the genre and should be apart of any zombie fan library.