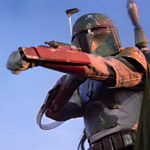 You are reading
Boba Fett Joins Season Two of The Mandalorian

The Mandalorian was a huge success for Disney+. It was a no brainer that a second season was coming. The showrunners announced that one Star Wars’ most iconic characters from the original trilogy will make an appearance in the upcoming season.

The Hollywood Reporter announced that Boba Fett will be taking part in the second season of The Mandalorian. Temuera Morrison, who played Jango Fett in Attack of the Clones, will reprise the role of the famed mercenary. The Republic used Jango Fett as the model for their clone army. He later made an unusual request to have one of the clones remain young, so he could have a child. That child’s name is Boba Fett.

The second-generation Fett literally fell to his doom in the original trilogy. During Return of the Jedi, Boba Fett fell into a sarlacc pit and presumably died. However, the second season of The Mandalorian confirms that somehow, the character survived his supposed death.

See More: The Rot Should Have Stayed In Hellblade: Senua’s Sacrifice

Some of the other people involved with the show included directors Robert Rodrigez and Peyton Reed. In March, Rosario Dawson announced her involvement in The Mandalorian. She’ll reprise the role of Ahsoka Tano, which is the first time the animated character will appear in a live-action show. Previously, Ahsoka Tano appeared in animated features such as Star Wars: The Clone Wars and Star Wars: The Rebels.

The COVID-19 pandemic has not delayed the production of the second season. It’s one of the only shows or movies that are still currently in production. Disney+ will release The Mandalorian’s second season this October. Overall, the first season was well-received. Many Star Wars fans were trepidatious that the first live-action Star Wars show wouldn’t deliver. Luckily, the show exceeded expectations.

Don’t forget to bookmark Lordsofgaming.net for all of your gaming and entertainment news.