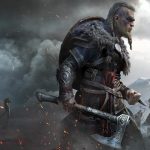 Assassin’s Creed Valhalla was revealed to massive fanfare from fans last week. As the long-running Ubisoft franchise is making its way to the Viking era in style. As we know from God of War (2018), the Norse mythos is filled with plenty of legendary gods and warriors for Assassin’s Creed to draw from. A new leak has revealed one such legendary encounter that could be part of the games seasons pass.

As originally discovered by ResetEra member SoulsHunt, a brief description of the games’ first possible DLC may have leaked via the German Uplay store. If you bring up the Ultimate edition version of Assassin’s Creed Valhalla in the Uplay store you get a brief description of the season’s pass. As well as a hint at a story mission based around legendary Viking warrior Beowulf.

While it seems unlikely that this is a full expansion pack based around Beowulf. Who for those that aren’t familiar is one of the most legendary Viking warriors within Norse mythos. This most likely is pointing to a preorder incentive bonus mission for players who buy the seasons pass of the game. However, with very little info on the game currently, this little tidbit is very exciting for fans. We hope to hear more official news and information from Ubisoft very soon in regards to Assassin’s Creed Valhalla.

What do you think of this leak? Let us know in the comments and don’t forget to check back for the latest gaming news and information.