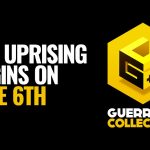 Early this morning, several European developers began teasing various pieces of an image. These studios included Larian Studios, 11-bit studios, and many more. It seemed to point to a group announcement that would be coming soon. We have officially found out what all these cryptic images mean.

It was announced on Twitter earlier this morning that the Guerrilla Collective is here. It is a multi-day all digital-focused press conference that promises new games, debut trailers, and to celebrate gaming overall. The conference is set to feature 21 developers/publishers that have been announced so far. With heavy-hitters such as Larian Studios with their upcoming Baldurs Gate III. As well as other big-name publishers and developers such as Rebellion, Paradox, Coffee Stain, 11-bit studios, and many more. It features a massive wealth of talented European developers, and will no doubt feature some amazing and diverse games. The event is set to run from June 6th to June 8th, and you can sign up for constant updates directly via the Guerrilla Collective site.

With no E3 event this year. We have seen many publishers and developers come together to put on their own events. It has been quite the undertaking, with IGN’s summer event. As well as Geoff Keighley’s Summer Games Fest, it appears that the industry has collectively come together and adapted. It will be very interesting to see what more announcements will come from the Guerrilla Collective in the upcoming months.

What do you think of all these new events announced in the place of E3? Let us know in the comments and don’t forget to check back for the latest gaming news and information.