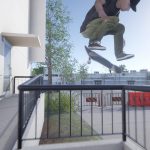 As part of the All Digital E3 Replacement Events, this week’s Future Games Show gave us new gameplay details on Skater XL. As part of a gameplay video, the developers showed off a new way to play skating games. Twin stick controls are used to control the player’s feet. Instead of using buttons for moves and tricks, the game lets the physics dictate the tricks. The developers also announced that Skater XL will be coming to Xbox One, PlayStation 4, and Nintendo Switch on July 28th. It is currently in Early Access on Steam. There are more details from the Skater XL team below.

The game is launching with highly renowned pros TIAGO LEMOS, BRANDON WESTGATE, EVAN SMITH, and TOM ASTA. Each skater will have their own gear that fits their style.

In Skater XL, players can shred legendary real-world skate spots that are home to some of the most iconic skaters and tricks in the world.

The possibilities are endless for players to personalize their Skater XL experience. Players can customize their entire look, including their skater’s gear with different tees, hoodies, hats, and shoes.

Come Play In The Sandbox

Each area is yours to explore. With the freedom of an open-environment, players will be able to push themselves, perfecting the subtle nuances of a highly technical trick or free form skate.