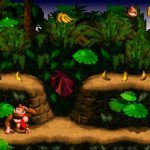 It has been a while since Nintendo’s last announcement of new games coming to the Switch Online library. This time, however, the news is worth the wait. Donkey Kong Country, the game which caused the jaws of millions of gamers to drop to the floor and helped turn the tide of the 16-bit console war in Nintendo’s favor, is at long last coming to the Nintendo Switch Online library. Those of you who are eager to relive this grand adventure will be able to play the game on July 15th.

However, Donkey Kong Country is not the only game coming to the Nintendo Switch Online library this month. Natsume Championship Wrestling will come to the SNES game collection. I do not know too much about this one but it does have a roster of 12 playable legends of wrestling along with single and multiplayer modes. The Immortal joins the list of NES games. I haven’t played that game since the early 90s and frankly, I am surprised to see it get revived on the Nintendo Switch.

Despite boasting some gorgeous (at the time) visuals and exemplary game mechanics, I am not a huge fan of Donkey Kong Country. While I recognize that they are great games with fantastic level design but I tend to favor exploration in my 2D platformers. I was always more into Yoshi’s Island. Even with that said, Donkey Kong Country is a masterpiece and certainly deserves to be included with the Nintendo Switch Online library.

How do you feel about these three additions to your Nintendo Switch Online catalog? Will you play Donkey Kong Country again for the nostalgia? Or perhaps you will check out Natsume Championship Wrestling and The Immortal? Let me know in the comments section.