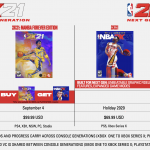 Amid speculation concerning an increase in retail game prices, publisher 2K made the first move with NBA 2K21.

Reported by GameIndustry.biz, PlayStation 5 and Xbox Series X copies of NBA 2K21 is said to be priced at $69.99/£64.99. Current generation versions of the game (PS4, Xbox One) will continue to be $59.99/£59.99. NBA2K21 is scheduled to release on September 4 for PS4 and Xbox One, while the next gen copies will likely launch alongside the new consoles.

A graphic can be seen below of 2K’s standards on pricing:

What The Price Increase on XSX/PS5 Could Mean

While the center of attention for next gen consoles have been about specs, prices for video games is another factor to consider. As noted by former PlayStation executive, Shawn Layden, in an interview, the cost of making games is getting more expensive. With developers and publishers promising more heightened experiences, the rise in cost is not at all surprising.

For years, we’ve been seeing a variance in game prices. From $60 to $70 and even $100 for upgraded “editions” with more content or physical goodies. Gamers seem to be in alignment with paying more if they’re getting more. However, that doesn’t seem to be the case with NBA2K21. Rather, gamers will be paying $10 more for the supposed best version of a game. Expect this point to be marketed towards consumers to signal its worth.

Gamers already equate price to the quality, length and substance of a video game experience. The higher the cost, the greater the expectation to exceed the subjective value of worth is. Long gone are the days of trying out a new game “just because.” Instead, developers and publishers may have to prove harder to earn the customer’s dollar. Especially in the current era of GamePass and digital services.