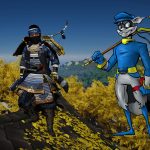 You are reading
10 PlayStation-Inspired Outfits in Ghost of Tsushima

Ghost of Tsushima is one amazing game to end the PS4 generation. Amid its visceral samurai/ninja combat and stunning East Asia vistas lies one of its best qualities – making Jin look cool (or silly) in the game’s wide range of outfits. From headbands to sword kits to different dyes for every armor, Ghost of Tsushima has more than enough options to get creative. So, we decided to put together 10 PlayStation-themed outfits inspired by the brand’s mascots! However, if you’re sensitive to spoilers, bookmark this page and come back to it once you finish the game. Otherwise, take a look below! 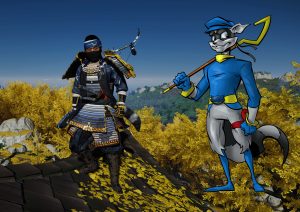 Some form of Sly Cooper’s presence was more than expected to be in Ghost of Tsushima. Sly Cooper and the Thievius Raccoonus is Sucker Punch’s first game that debuted on PS2 with multiple sequels following. In that sense, it’s only right we got some nod to the series. This outfit in particular actually unlocks a PSN trophy called Cooper Clan Cosplayer with the description to dress up as a legendary thief himself, Sly Cooper. I played around with this variation a bit. Swap out the Thief’s Wrap for the Conqueror’s Mask then the Sly Tanuki sword kit for Hijiki in Sunlight. That way, you get an eye-covering mask similar to Sly and your sword kit matches the color of his hook cane. 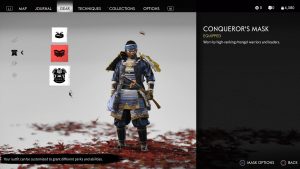 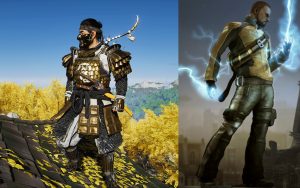 The second IP developed by Sucker Punch, the Infamous series gave superhero games a run for their money back on PS3. Protagonist Cole McGrath is known for his electric powers, so having a yellow-colored sword kit felt right. He’s also known for his yellow-jacket. Combining his look and intimidating presence, I decided to have Jin represent Cole’s demeanor with the Sakai Clain Armor and Sakai mask. 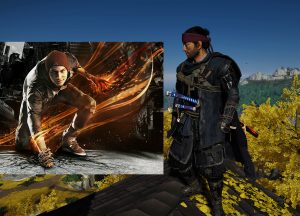 Delsin Rowe, the protagonist of Infamous Second Son, was given an obvious easter egg in Ghost of Tsushima – his own head band. While it would have been hilarious to see Jin wear a beanie hat like Delsin, the large headband is good enough. Since Delsin’s outfit is a little more hipster-like, I gave Jin a neutral-color in his Ghost Armor. Delsin’s first superpower is harnessing smoke, so giving the him the Yasha’s Embers sword kit seemed fitting. 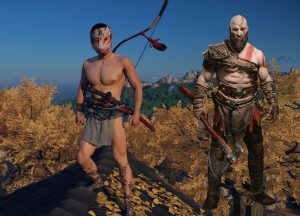 The true inspiration for this article. I obtained the Fundoshi getup very late into the game and immediately thought of Kratos. Red is a color that pops in Ghost of Tsushima, so seeing streaks of red on a half-naked man with a katana is silly and terrifying! While a red-colored headband can suffice, the Shattered Mask of Tomoe compliments Kratos’ red tattoo way more. The Bashamon’s Fortune sword kit is the perfect tone of deep red with a black handle and a spiky hilt, symbolizing Kratos’ dark personality. No head wear is required, but, to me, Jin’s Headband of Death perfectly captures the bloody legacy of the God of War. 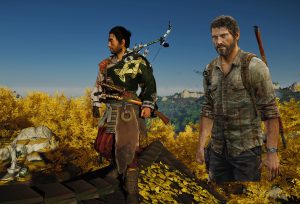 When I pictured Joel Miller from Naughty Dog’s The Last of Us, I immediately thought of his faded green checkered collard shirt. The second item I remembered was his the rifle slung over his shoulder. Using those images as references, Jin’s green color variant of the Tadayori armor made sense to me. The Hijiki in Sunlight sword kit represents the color (and even the shape) of Joel’s rifle as well. While Jin is more fashionable than Joel here, I feel like this particular outfit speaks to Joel’s rugged sense of style. 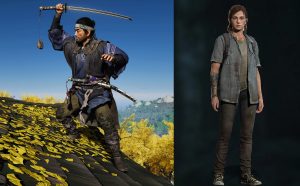 Ellie takes a bit after Joel in terms of clothing – rugged-looking collard shirts and dark-colored pants. Too bad 13th century Japan didn’t have Converse sneakers. Ellie keeping her blue collard shirt unbutton reminded me of Jin’s navy blue Traveler’s Attire gear. Roomy, comfortable, adaptable – all characteristics of Ellie’s and Jin’s outfits. The chosen sword kit is Warrior’s Brush which I think speaks to Ellie’s journey in The Last of Us Part II. Notice how the sheathe is split-colored black and white; to me, this symbolized Ellie’s dark and light nature constantly battling one another. The idea is very similar to Jin’s journey throughout the game with deciding what he needs to be to protect his home (The Ghost) versus what he’s expected to be (Samurai). 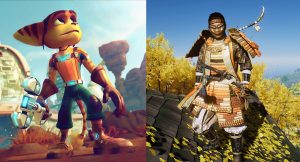 This gear set was the most fun to put together. Ratchet’s clothes and tone are complete opposites to the world of Ghost of Tsushima. And yet, Sucker Punch gave players great options to replicate what makes Ratchet stand out. Orange is the prime color theme while the steel-like color of Genbu’s Darkness represents Ratchet’s melee weapon. If only I had a little robot to complete the set. 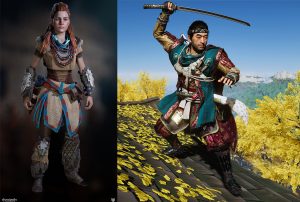 I know the color is a stretch here, but hear me out! A lot of Jin’s gear don’t have the kind of color variation Aloy has. The beige may be easy to pick out, but the light blues, reds and her orange hair stick out from the rest. That’s why the Ghost Transcendent color from the Ghost Armor fits perfectly. The Headband of Survival matches the getup as well for its name alone (Aloy is a hunter survivor in her game), including the visible the symbols on it. Those represent the caveman-like and tribal society present in Horizon Zero Dawn. Since I didn’t acquire the Nine-tailed Fox variant for the Long Bow, it’s not included in the photo. But, it is recommended for this outfit since it’s the best fit to go alongside the Heavenly Falcon sword kit. 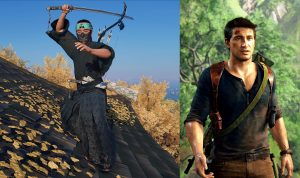 Nathan Drake, an iconic PlayStation mascot from the Uncharted series that began on PS3. My inspiration for the design was to go a little goofy, but also give a nod to his master stealth abilities. I chose the Ronin armor for Jin since it specializes in stealth mechanics. I really liked the blue colored shirt from Uncharted 4 Drake, which was my chosen color for Jin here. The Headband of Perseverance speaks to Drake’s curiosity and commitment to see his treasure hunting ventures to their end. While Drake is anything but a Glowering Warrior, the mask looks like its smiling and reminded me of Drake’s sense of humor! 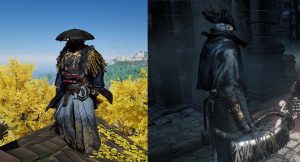 You didn’t think I was going to leave out the Hunter from Bloodborne, did you? The theme of this set is “animalistic shadow.” The Genbu Straw Hat covers the eyes while the Haunted Dreams (a name that’s absolutely perfect for a Bloodborne-inspired outfit) mask completes the “face in shadow” appearance. The armor itself has fur wrapped around in dark to light colors complimenting the menacing-looking coat on the Hunter. Lastly, Moon Bear’s Paw seemed all too easy to pick. It’s as if Jin is using the dismembered weapons of his enemies as his own, similar to the grueling darkness and survival themes of Bloodborne. 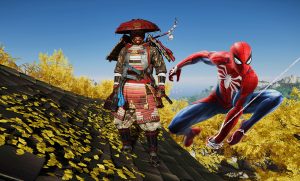 Look out, here comes the Samurai-maaannnn!