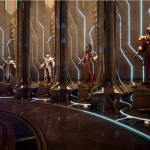 You are reading
Godfall Gets 9 Minutes of New Gameplay Revealed

Today was PlayStation’s latest State of Play event. The event primarily focused on experiences coming to PlayStation 4 and PSVR. With all of this being said, we still got to see some next-generation gameplay in the showcase. Godfall is a PlayStation 5 launch titles from developers Counterplay Games and published by Gearbox. Godfall is launching on PlayStation 5 and PC during Holiday 2020.

In this new footage, we get to see more of the combat system in action. The primary focus of the game is based around the kinetic combat that takes center stage in this footage. The game is visually stunning and looks almost like Warframe with a more Elder Scrolls aesthetic We will no doubt see more about Godfall before its launch this holiday season. The game is set to be one of the PlayStation 5’s launch titles. Whenever we find out about when the release date of the PlayStation 5 is, we will most likely learn more about Godfall’s launch plans. Until then, check out 9 minutes of Godfall gameplay narrated by one of the developers.

Are you interested in Godfall? Let us know in the comments and don’t forget to check back for the latest gaming news and information.