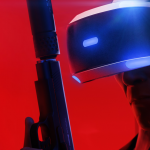 You are reading
Hitman 3 Will Feature PSVR Support

Hitman 3 is the next step in Agent 47’s story. After a strong reception for Hitman 2, when it launched back in 2018. Since the series reboot back in 2016, IO Interactive has found new life in the franchise. With fan feedback of Hitman 2 in hand, IO Interactive has been wanting to take Hitman 3 to the next step. They revealed today, that we would be controlling Agent 47 in a whole new way. The sandbox of assassination that Hitman 3 will feature PSVR Support.

Today, during the PlayStation State of Play. IO Interactive shared the first look at Hitman 3 from the eyes of a PSVR headset. You will be able to take first-person control of Agent 47 and assassinate your targets with ease. In a blog post after the announcement, they shared more of what they want to bring with their PSVR support.

“We’re talking more than 20+ locations across all three games that can be explored and experienced in an entirely new way. As a reminder, we revealed in the HITMAN 3 Announcement that it will be possible to ‘import’ locations that you own from the previous two HITMAN games into HITMAN 3. You’ll need to launch locations from HITMAN 3 to play them in VR. We’re working to finalize the specifics for how PSVR owners can enjoy HITMAN in VR, and we’ll have more details to share in the months ahead.”

IO Interactive continues to be dedicated to letting their players bring their content forward with them. It will be interesting to see how immersive the PSVR functionality of the game will be. The idea of controlling 47 through combat and stealth scenarios is certainly enticing.

What do you think of Hitman 3 coming to PSVR? Let us know in the comments and don’t forget to check back for the latest gaming news and information.