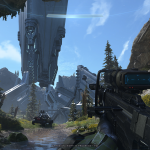 We had the opportunity to sit down with Miles Dompier of Windows Central and discuss a wide variety of topics; his background, career, Halo Infinite, Elden Ring, Hellblade 2, Starfield, E3, and much more!

“…The most exciting thing about Xbox’s future I think are the unknowns; the new IP, the big Third-Party partnerships, and all these kind of incentives that Xbox is providing developers to make the best games that they can make…”

Miles on the revamping of single franchise studios for Xbox –

To listen to the entire interview, please click below.