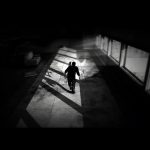 Rewind back to February 4th for a moment. Major industry figures start tweeting their press copies of Press Reset, Jason Schreier’s new book. Schreier quote tweeted one, adding that his DM’s were open for press outlets to request a copy, even the smaller ones. I, seeing this on my lunch break at work, took my shot, and the review went up this week.

Despite my contentedness with my review, I left something specific out to prevent my personal biases from taking over. However, this article is not a review, so I feel fine mentioning how many aspects I’ve felt from this book in my life. Unfortunately, the most volatile aspects Press Reset addressed have shown up in bunches. Job loss, burnout, and poor work-life balance all pop up in my history. 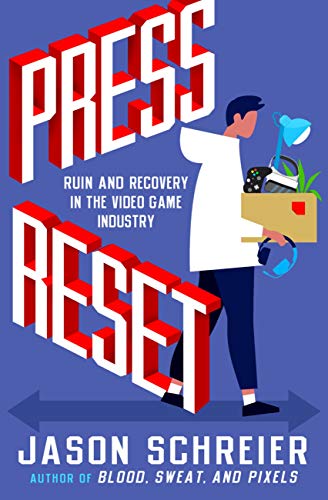 I’ve literally been the guy on this cover before, walking out of a job for the last time, taking what I thought was my future with me.

A hard reality about the gaming industry is the prevalence of layoffs. I remember when Activision-Blizzard laid off 800 people, despite its record profits. That day, I was following along on my phone at my office job, enraged at layoffs despite the financial success. Layoffs like that happen repeatedly through Press Reset.

“Is there anything more ghoulish in corporate America than referring to taking people’s job’s away as ‘reallocating creative resources?'”

Schreier left a footnote there to say “Is there anything more ghoulish in corporate America than referring to taking people’s job’s away as ‘reallocating creative resources?'” That is the least objective he gets in Press Reset, and after my experiences, I get it.

This month marks my college graduation’s fourth anniversary. Last year, when I joined Target, that became my eighth job change since graduation. Although not every change was bad, they do include getting fired, laid off, time on unemployment, and nearly falling for a fake job offer. Target, at thirteen months, is the second-longest I’ve ever held a job.

Press Reset hammers this and other points home with repeated examples of job loss. It felt like I was rereading, and sometimes reexperiencing, my mid-twenties over and over again.

One bright spot here is I have no direct parallel from Press Reset for this. However, I do know the consequences of poor work-life balance.

The chapter “Workaholics,” covers Zach Mumbach’s story from working with Visceral Games, and by extension, EA Games. Early in his career, Mumbach could afford (with an ankle monitor attached for his house arrest sentence) to work grueling hours in QA. As he grew older and started a family, that had to end. His work took so much out that he was barely present for his firstborn’s infancy.

I’m not a dad yet, but I know I’ve failed to balance this load before. When I got laid off, I was dating someone for about a year and a half. Not only did I have a part-time job to make sure I had non-unemployment money, but I had to look for work per my state’s laws. As the months went on, my anxiety of running out of unemployment grew, as did my attention towards job hunting.

Do you know what didn’t grow? My attention towards my girlfriend. We broke up about three months after my layoff. I know that my job hunt wasn’t the only factor in that breakup, but I know it exacerbated it.

I am still friends with this woman, and I have dated another since. However, my work-life balance faltered here, and I can’t help but feel for Mumbach.

Burnout Takes Many Forms in Press Reset. Same for Myself 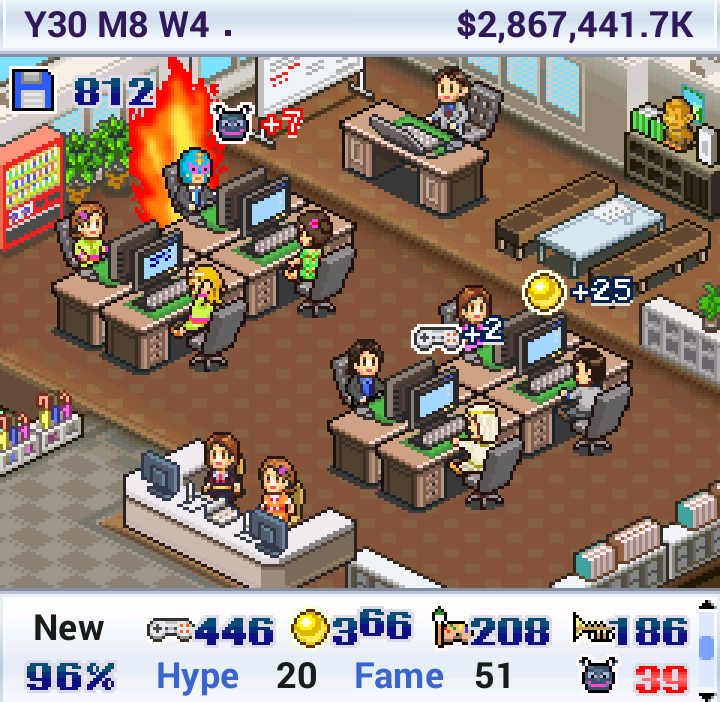 For anyone who read Schreier’s first book, the epilogue referenced the burning developer in the top left. From Game Dev Story by Kairosoft

A common thread throughout Press Reset is burnout. When someone works so hard and encounters continual setbacks and disappointments (for whatever reason), they burn out of what they do. Warren Spector did it when working with Disney, numerous 38 Studios employees got flamed in the fallout. Burnout is very common.

Here’s where we finally catch up to my present. I’ve been with Target since mid-April of last year. For somebody with my job volatility, this was a welcome change of pace. I knew on day one it was at least a decent job (and it pays well enough for me to survive without a second). Now, it’s given me some of the best friendships I’ve made since college.

It’s not all rosy, though. As a fulfillment specialist (the team that picks and packs all customer orders for delivery and pick up), it’s a physically demanding job. Also, working with the general public during a pandemic where hundreds of people flaunt and fight basic safety guidances like masks is challenging. Add in COVID cases in your personal life and, well, you get the picture.

I know I’m working nowhere near as hard as these game developers, nor giving anywhere near the number of hours they are. But goddamn do I get what they mean by burning yourself out.

Let me make one thing clear; I have not had a bad Target experience, overall. Frankly, this is probably the best job experience I’ve had since graduating. I’d be lying, however, if I said that I never thought about leaving it.

My One Plea to Readers: Find Ways to Empathize

Game development is not at all the rainbow and sunshine job it seems from the outside. Schreier’s work, as found in Press Reset, highlights real stories. Those stories are why we need to talk about crunch: these unstable conditions are dismal.

So the next time you roll your eyes at another crunch story, think about times you’ve had to grind at a job. Maybe it was something you really liked, or maybe it just supported you and your family.

Think about the times you had to choose work over family. I guarantee that some of you reading missed out on important life moments. Hopefully, you maintained your relationships successfully.

Finally, think about every time you lost a job. Think about the fear and uncertainty that it wrought. You might have asked yourself how long you could afford to stay unemployed.

Take all of those worries and fears, and that is what game development regularly turns into. Grueling hours that entangle your work and life together that might still leave you laid off. Keep that in mind while you play video games. The creatives behind these games deserve better.