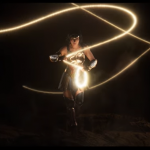 Today is the Game Awards which means a massive celebration of the gaming industry is on its way. Celebrating the creativity and hard work of all the developers who developed and published games in 2021. As is tradition with the Game Awards we have a wealth of new trailers and announcements to be excited for. Tonight, a Wonder Woman game was announced.

The classic DC heroine is finally getting her moment in the spotlight. She will star in a brand new game. While details are scarce, the pedigree of the developer could not be higher. Monolith Games previous efforts include the stellar F.E.A.R., Condemned, and Middle Earth: Shadow of Mordor games. It is reasonable to assume that the game will be a third person action game. It does not look like Gal Gadot is lending her likeness to the game though.