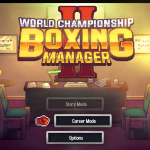 Pax East 2022 is here, and the Lords from the Iron Lords Podcast and LOGNET are live on the show floor. One of the many games being previewed on the show floor this year is World Championship Boxing 2. The game is a sports management simulation that puts players in the role of boxing and business manager.

World Championship Boxing Manager 2 will be available for Windows PC via Steam and GoG.com, PlayStation 4, Xbox One, and Nintendo Switch in spring 2022.

Be sure to wishlist World Championship Boxing Manager 2 on Steam. Check out more coverage coming from the Iron Lords Podcast and LOGNET crew here.