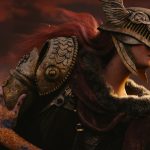 The “Souls” community is a weird one. It’s a community filled with people who wish to punish themselves in the very challenging series. From the original Dark Souls to Sekiro: Shadows Die Twice before the launch of Elden Ring. But when Elden Ring launched it became a phenomenon.

Scoring unbelievably high amongst critics and winning over not just the Souls community, but the general gaming community as well. As it was more accessible than the previous FromSoftware games. 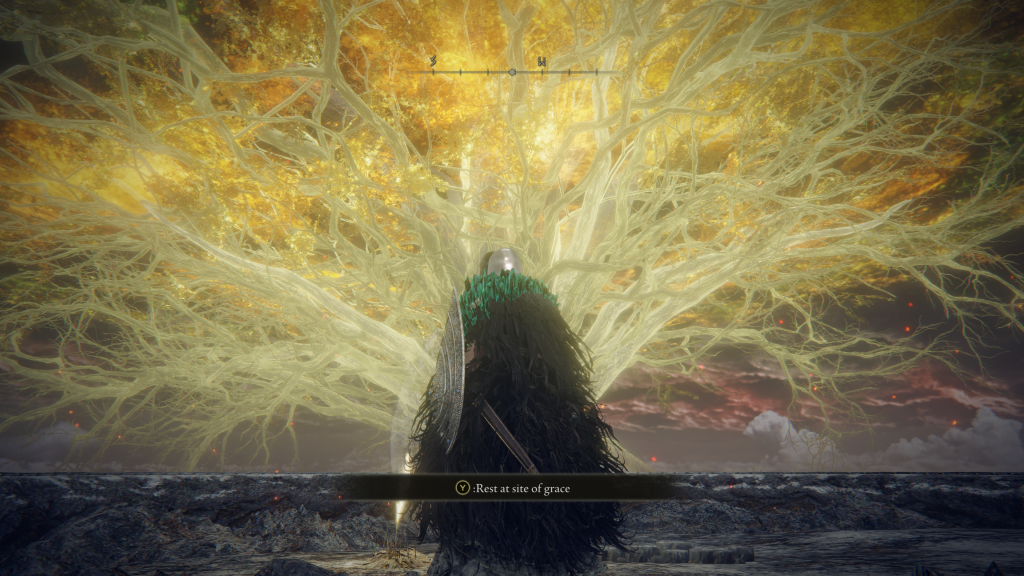 But even with a slightly easier title, there are still many challenging endeavors. One is “Malenia” a late-game boss that players can struggle with. That is until a hero emerged from the game’s co-op system. There is a player going by the name “Let Me Solo Her” in the game’s co-op system. But only if you try to summon someone in the room before Malenia herself. He only appears on PC and you will know him when you see the name. As well as him wielding only two blades and a jar on his head.

However, we will need to do some digging to truly tell this tale.

Diving into Let Me Solo Her 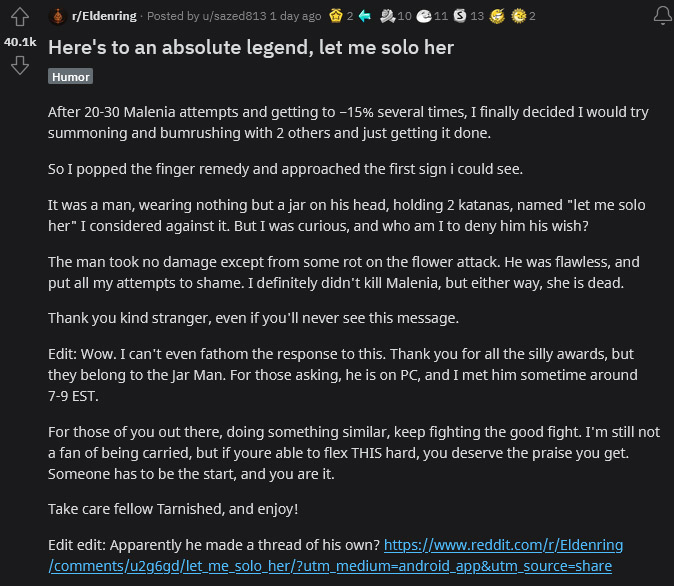 The man took no damage except from some rot on the flower attack. He was flawless, and put all my attempts to shame. I definitely didn’t kill Malenia, but either way, she is dead.

Who is this person and why do they help? Well, it is a mystery outside of this person wanting to be the very best at eliminating Malenia. This sparked the subreddit to make multiple threads and posts about the hero. Fanart was created for this player as well.

Let me solo her. pic.twitter.com/yEOz9zH6km

The reverence for this player even reached the point of someone making a statuette in their honor.

I can’t believe the “ Let me Solo Her “ guy got his own statue😭😭😭 the Elden Ring community is unmatched tbh🔥 pic.twitter.com/KdJRQt3vY9

Not all heroes wear capes… and this one apparently doesn’t care much for an attire of their own. But who is Let Me Solo Her? How can you the reader see their exploits if you don’t play Elden Ring on PC? Well, there was a video posted by Youtuber “Klein Suboi” with a full Malenia fight from the perspective of Let Me Solo Her. Pointing toward them being the legend.

When Sazed813 said “the man was flawless” they were correct. A full ten-minute fight on an inarguably challenging two-phase boss and not a single scratch on Let Me Solo Her.

It’s very rare to see scenarios like this in video games. The player Let Me Solo Her might not have an actual motive outside of just wanting to help players, with no expected reward outside of honing their skill. If one thing is for certain from this entire situation? It’s that the Souls community is a weird one, but one that hosts legends such as a disrobed man with a pot on his head helping players in need.