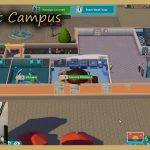 Lord PeteyTV is here once again to tell you about the new title from Two Point Studios called Two Point Campus. This builder game brings back huge amounts of nostalgia for me as it looks and feels just like Theme Hospital and its predecessor Two Point Hospital. This version builds on all the past versions, but iterates in its own way. Each school year you can add more courses and add more to the buildings. Check the video below!

TwoPoint Studios once again brought home an amazing game. Pick it up now on Steam or Xbox Game Pass! Our full impressions are in the video below. While you’re here, be sure to check out other first looks by LordPeteyTV right here.

What did you think about the Two Point Campus video above? Does it seem like your kind of game? Sound off in the comment section below! And as always, be sure to check back to Lords of Gaming for all your gaming and entertainment news, analysis, and reviews. Check out the game’s on the Steam or Xbox Game Pass now!