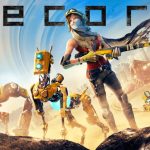 You are reading
ReCore Review: A New Dog With Old Tricks

ReCore is a very ambitious game that serves as a near perfect example of a mix of fantastic, yet simplistic gameplay and flawlessly executed platforming. I can’t describe the amount of nostalgia and fond memories of my youth playing ReCore reminded me of and for some games, that charm wears off. Thankfully for ReCore, after putting over twenty-six hours into it, still feels as amazing as it did when I started and this game. I started playing expecting a small new IP experience from has since then become my third favorite game this generation.

There are a few, very minor, negatives for ReCore. Throughout my time I got hit with three frame dips, none of them being game breaking or hindering in either way, but definitely noticeable. I came across one bug that caused my map to not load into the game, making it so I had to go back to the title screen and reload my data to fix it. The story is fantastic, but I can’t help but get the feeling that the ending was a little rushed. It is by no means terrible but the ending doesn’t match the fantastic tone the rest of the story nails.

The positives for ReCore far outnumber the negatives. The characters are well done with Joule shining immensely over the others. Throughout your adventure Joule becomes someone relatable to the player and you actually feel her emotions and struggles. I couldn’t help but get a Lara Croft vibe from Joule in the best of ways. She shows how a main character can be rugged and tough while still being very vulnerable and emotional. To make things even better the voice acting done by Erika Soto is nothing short of stellar for Joule, she absolutely nails all of the emotional tones and mannerisms to Joule and makes her feel alive.

An example of character building for the corebot Mack.

Your companion corebots are also amazingly done which shouldn’t be surprising with Keiji Inafune on the ReCore team. Even though your bots don’t really talk to you, the way their actions and attitudes shine through crystal clear and communicate to you their emotions are fantastically done. They make sounds to get your attention if they spot something on your adventures and even make painful sounding beeps in battle to alert you to their health which is an appreciated extra little detail that goes a long way.

The most impressive attribute for ReCore is the near flawless gameplay and platforming. Battle mechanics are done in a simple yet immensely deep way that encourages experimentation with combos and customisation of your corebots.

A small example of customization for Seth.

To upgrade your corebots you’re required to collect cores to increase the stats or you can collect parts from enemies to upgrade the frame of your bots. You can’t have both so it’s a constant mind game of supply and demand that becomes very intoxicating.

This a rather challenging Traversal Dungeon.

Not to be outdone, the dungeons in ReCore are top-notch showing off the fantastic platforming the game has to offer. Dungeons challenge you in a variety of ways such as  Traversal challenges that see you making daring jumps and dashes all while attempting to collect a special key and shoot specified targets. Arena dungeons thrust you into a gladiator style arena where you’re met with waves of ever harder enemies while you’re tasked with collecting the afore-mentioned key and targets. Lastly, there are adventure dungeons that offer a more traditional take on dungeon crawling with a mix of battles and platforming ending in a mini boss encounter.

Added bonuses are things like the fantastic musical score that’s used very well. There’s small beats that play when you open up supply caches that makes doing so feel epic and uplifting. The amount of collectibles is another bonus. Things such as audio logs and rare corebot frames as well as hunting challenges have you venturing out into the world over and over again.

While not at all perfect ReCore, is a fantastically done game that has the heart of a classic with the tricks of a new franchise with a lot to offer, especially for a $40 price tag. It is also the first installment of Xbox’s Play Anywhere titles, which will allow you to play on both your Xbox and PC. If you’ve ever been a fan of games like Megaman, Metroid or Ratchet and Clank, then ReCore will probably be for you.

Tell us here at PBG what you think or ReCore if you picked it up and if this review may have helped you in any way. Remember you don’t even need to sign up to comment! As always thank you for reading, keep it tuned to Playback Gaming for all your latest gaming news and have a great day.