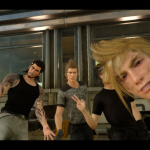 Final Fantasy XV was finally released very recently and with it comes the drive to level up and collect GIL as much as possible. We aim to show you a method to farm EXP and GIL that is accessible for most players and is dependable even as your levels grow ever higher. This method involves doing a specific hunt multiple times as efficiently as possible to max EXP and GIL gain without offering too much hassle.

We will list the bare minimum requirements to get started on this method as well as optional things you can do to make it more lucrative. It’s worth noting that the easiest method does require you progress into or passed chapter 13 but this is still doable far earlier than that. So without further ado lets list the requirements and optional choices below then dive into the farm.

So to get the farm started you make your way to Verinas Mart on your map. Once there you want to speak to the tipster there and then accept the Verinas Mart Under Threat hunt. The enemies you’re after are Wyverns and they’re very close to the tipster which is part of why this method is so nice. Before engaging the Wyverns it’s worth noting that they are weak to Blizzard and Greatswords. So Blizzard spells are great for fighting them as well as Ignis’ tech skill Enhancement.

Here is Verinas Mart on the world map.

Make sure if you have any accessories that give extra EXP such as Moogle Charms then equip them. Once you’re all set call your chocobo or run to the hunt area, kill the Wyverns, turn in the hunt and repeat as many times as desired. The Wyverns each have a chance to drop a Wyvern wing on death which can be sold for 1,600 GIL a piece and since you fight 7 Wyverns you have the potential to make over 10K GIL per hunt. After you save up the desired EXP make your way to a good lodging with an EXP bonus and rest to cash in and level up. That’s it for the basic method.

This is turning in the hunt after it’s done.

If you’re higher leveled and have access to Umbra and The Ring of the Lucil then there are a few things you can do to make this method far more lucrative. Make sure you travel to Verinas Mart but before you pick up the hunt, use the RV nearby to call Umbra and travel to past Altissia. Once there you want to head to the Maagho bar by going up to a Gondola and traveling to it. When you get there speak to the tipster and order his Lasagna. This Food costs 8,000 GIL but boosts EXP earned by 100%!!! After you eat, go back to the Gondola and travel to The Leville. From there call Umbra again and go back to past Lucis.

This is the Lasagna at Maagho that you want.

You should appear at Verinas Mart and then equip Noctis with The Ring of the Lucil. After that accept the hunt and make your way to the Wyverns as usual. When you get to the Wyverns use The Ring and hold down the attack button to use Death and suck the life out of the enemies. This will kill all the Wyverns in only a few seconds while still providing the EXP and Wings used for GIL. From here the process is the same until you get the desired EXP. After you’re done farming make your way to turn in the hunt and sell all your Wyvern wings. Then call Umbra once again and travel to Altissia again. You will appear in The Leville and from here you want to stay the night at The Leville. It costs 30,000 GIL but will Triple all EXP gained. For example we farmed until we had 3300000 EXP roughly then we slept at Leville and had a total that tallied over a million EXP.

Our results after an hour and starting with Noctis at level 47.

That’s all there is to this farming method. We hope that it helps you level and make lots of GIL. If we missed anything or if you know of any other farming techniques then feel free to comment and let us know, no need to sign up or anything.