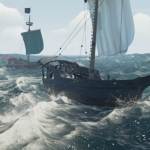 If you’ve been on Twitch as of recent, you may have seen that Fortnite was surpassed (albeit temporarily) by a pirate-sandbox game called Sea of Thieves by Rare, as the most streamed game on the platform. Like other multiplayer sandbox games like No Man’s Sky or Fallout 76, Sea of Thieves was originally released to pretty mediocre and underwhelming reviews, but like No Man’s Sky (76 hasn’t been out long enough to get this treatment) it has clawed its way back into the limelight thanks to the trendsetting Twitch streamer, Summit. He started streaming Sea of Thieves soon after the ‘Shrouded Spoils’ content drop which was the most filled continuation of new content that the developers have added to the game. Once Summit started streaming it, more and more big-name streamers joined in before Ninja, the biggest Twitch streamer, who has been on major magazine covers among other prominent appearances, started streaming. This game is a prime example of how continued content releases that are made with an ear towards the community can make like-built games skyrocket in popularity after an originally disappointing launch.

At release, Sea of Thieves was criticized for its lack of content. There were numerous islands sure, but there were only 3 quest types, PvP combat, skeleton forts, random loot drops (shipwrecks and treasures on islands), and the Kraken. Further, it also had very few aesthetic choices both for the player avatar and their ship, leaving many players feeling cheaped out and restless. The developers promised more content over the lifespan of the game, but many players already felt done with the game.

That didn’t stop the developers from moving ahead.

By the end of 2018, they added four major content drops in The Hungering Deeps, Cursed Sails, Forsaken Shores, and Shrouded Spoils along with weekly challenges for players to do for a couple of months. While the first three content drops gave players more original stuff to do/cosmetic additions, the Shrouded Spoils is the one that mostly varied what was already in the game. More forts went active, the megalodon and skeleton ships started to come in more varieties, the Kraken learned a new trick (which has painfully bitten me and my crew in the ass), and more parts of the ship got cosmetic options.

Even with all that aforementioned content, there are definitely more changes and updates Rare has made that I have yet to mention, but if I did this article would take an extra week to write. It’s reasonable to criticize Rare for having not as much content at launch, but they also deserve credit for ensuring their game had long-term success by listening to their fanbase.

The developers proved how much they listen to the community

Rare has shown time and time again that they listen to their community to improve their game.

First, like many online games like Sea of Thieves, Rare makes regular balancing updates to their game and weekly developer update videos. Then, every now and then you can find a senior developer responding to fan questions on Twitter, Reddit, etc.

At some point in 2018, this poll was posted on the game’s discussion boards asking what the community wanted most in future content releases. The top four picks were new ship types, quest types, NPC’s, and areas to explore in the open world. Fast forward to the date of the above link’s posting, and Rare delivered all four; they added the brigantine ship type for the ‘Cursed Sails’ event turned content drop, runner missions, and a new section of the map during the Forsaken Shores update, and new NPC monsters with the ‘Hungering Deep’ introducing the Megalodon and the Skeleton Ships/Fleets with the aforementioned ‘Cursed Sails’ update. Just as notable, they are great about timeliness.

Acts like these show how much Rare cares for its game. Their strategy for getting people to play the game has been to start with a little bit of content and listen to the fans to see what they want. It took a long while, but so far, they’re on the right path as they’re starting to explode right before they drop their Arena mode.