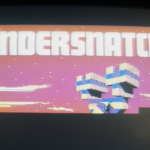 You are reading
Bandersnatch and the Illusion of Choice

Bandersnatch, Netflix’s Black Mirror interactive experience is quite the bit of technical wizadry, but ultimately left me feeling disillusioned with the whole affair. In Bandersnatch, players are given the ability to decide the choices of protagonist, Stefan. Stefan is a budding game developer in the early 80s, the heyday of single developer teams. His game, Bandersnatch, is based on a choose your own adventure book, and it is (Black) mirrored by the interactive experience given to the audience. Audience members choose things as innocuous as what breakfast cereal Stefan eats, to whether or not he should jump off of a balcony several stories above ground. This is done through a series of binary on screen prompts the likes of which are familiar to anyone who has played a game in the last twenty years.  Do I chose A or B? It is this fundamental choice which exists in all video games. Do I do this side quest: yes or no? Should I sneak in through the vents or crash through the front door? Do I talk to this NPC or do I just keep running? All games, and indeed all choices in life come down to A or B, but in Bandersnatch, and unfortunately in still too many games, choosing A or B amounts to no choice at all. Allow me to explain.

When presented with choices in games, players will gravitate towards one of four options. Option A is to role play. The player tries to imagine what the character in the game would do and play to this perspective. This works best when given a predefined character, such as in the Life is Strange series. Option B is to play according to the choices you personally would make if you were in that situation. This works best when given a blank slate, such as in the Elder Scrolls games. Finally, Option C is to min-max. The simplest example of this is the Mass Effect series where a player would always choose renegade or paragon to maximize their in-game karma in a given direction. Option D, I suppose, would be the Joker option, where the player chooses at random, because let’s be honest, you’re really just interested in getting back to the combat.

You can think of a video game like holding a broken rubber band between both hands. There are fixed end points, but the middle is free to roam. Each game starts with the title screen (or equivalent) and ends when the credits roll. What you do in between, the choices you make, the quests you embark upon, the moves you input, are determined by how much stretch the rubber band has. An on-rails shooter is like a rubber band that has been put in the freezer. It isn’t pliable at all. You move forward and shoot things. On the flip side, an open world type game, such as Red Dead Redemption 2(RDR2), has an incredible amount of give. The possibilities are vast, and your choices can move you either laterally or forwards. But do the choices matter?

Let’s look at Bandersnatch, which I will refer to as a film for the purposes of this article. Let’s cover the basics. Bandersnatch, like RDR2, seems to break the rubber band model in that there are multiple endings. So shouldn’t it actually be a rubber band with multiple other little rubber bands? The answer is no. You still finish the film when the developer has decided you have finished the film. You have no choice in the matter. At multiple points, most notably at the beginning of the film, you are given a choice about whether you want Stefan to join the team at the fictional developer Tuckersoft. 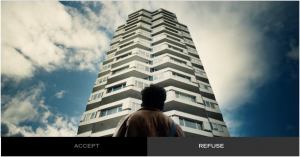 Take a job doing what you love, where you have creative control, health insurance, and a team of experts working with you?

This leads to the film’s first of many dead ends that I received over the course of watching. After making this choice, we see that Bandersnatch, the fictional game that is being developed in the film, was released to poor reviews and Stefan is depressed. The film then backtracks. As in, it quite literally rewinds to the point that you made the choice to join the team, with a quick vignette of the major points that lead you to that decision.  When gaming, I tend to take Option A of those listed above. I roleplayed as Stefan, who was eager to jump at the chance to work on his game full time with his hero, developer whiz kid Colin Ritman, played wonderfully by Will Poulter. And yet, I was rebuked for my decision. The director chastised me four more times before I completed the experience to the director’s satisfaction, and the credits were allowed to roll. What a disappointment. If the choice is made available for me, let me take my disappointing ending. Let me, and by proxy, Stefan, live with my choices. Otherwise, what is the point? A couple of meta tricks where Stefan looks up at you and asks what to do next? Why film two versions of that scene if only one of them will allow you to reach an ending scenario. By giving the audience choice, but not fully granting control, the experience is ultimately flat.

The face of God in the Bandersnatch universe. No wonder everything is so dreadful.

Every game struggles with this illusion of choice. Multiple endings strengthen the illusion, but that rubber band is still fixed at the end. You can’t slide your hand along the rubber band at will. The developer has chosen a point where the game ends. In Bandersnatch, the developer quite transparently rebuffs your attempts at choice on multiple occasions and denies you any ability to choose when the experience ends. Except one. As the player, you can choose not to play. This is the only actual choice you have. It’s a choice that has great power in today’s world with ten thousand pieces of content being released every hour demanding your time and attention.

There is one game that directly deals with this idea: Dark Souls. In Dark Souls, you take on the role of an undead, a creature who can die and come back to life numerous times. The world is populated with hundreds of creatures just like you, only instead of embarking on an epic quest, they wander about in various degrees of mindlessness. This state is brought about, by the people in the world losing their sense of purpose. By giving up on the game, you, as the player, are giving up on the character’s purpose in the world condemning your character to wander about as a hollow shell of your former self. The choice of choosing not to play produces an ending for your character unconstrained by the developer. That character now lives in the infinite possibility space. He is Schrödinger’s Cat, both alive and dead in perpetuity.

Option A or Option B? Is it an option at all? Do your choices matter when everything in the game can only follow a predetermined path laid out by some development team? These questions have been given a new dimension with technology, but they are the same fundamental questions that have been in the minds of humanity since the beginning. As games grow more complex, players will be confronted with increasingly strong illusions of choice, but the true revolution will come, when players have the freedom to choose your own ending, not just your own adventure.