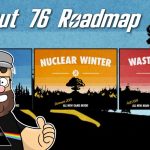 You are reading
The Future of Fallout 76: A Roadmap to Die For

If the 7th generation of consoles were known for first-person shooters and the advent of team-based multiplayer PvP, the 8th gen will certainly be remembered for the creation of the MMO lite. Sure, battle royale games are popular but until we evolve beyond the everyone developers just adding toppings to the battle royale sundae and start creating different flavors, we have barely scratched the surface. But the MMO lite really exploded this generation as we’ve moved more towards the games as a service model with varying degrees of success. Warframe kicked it off in 2013 centered on crafting and frame diversity, followed by Destiny in 2014 with a predominant focus on weapons and raids, then by the Division in 2015 with their focus on gadgets and tactical ability.

Publishers have been trying to tap into this vein as it is proven to be a lucrative venture based on sale figures from Destiny and Division alone, with EA being the most recent to join the fray with their Iron Man simulator, Anthem. But in 2018, Bethesda entered the field with the much-maligned Fallout 76 which released that November alongside several controversies. Not to dwell on this too long, but the biggest reason the gaming community dogpiled on Fallout 76 was due to a miscommunication from Bethesda; that this was Fallout with your friends and that alone then in actuality, Bethesda had created an MMO lite that doesn’t feel like one at all. The single player community who championed single player games as their bread and butter (but didn’t buy Prey, Doom, or Wolfenstein) felt “betrayed” and took to Twitter and those who had long awaited Bethesda to make a true misstep were overjoyed to take a legitimate opportunity to rag on them. Even months later, YouTubers are still making videos to capitalize on Bethesda’s mistakes. 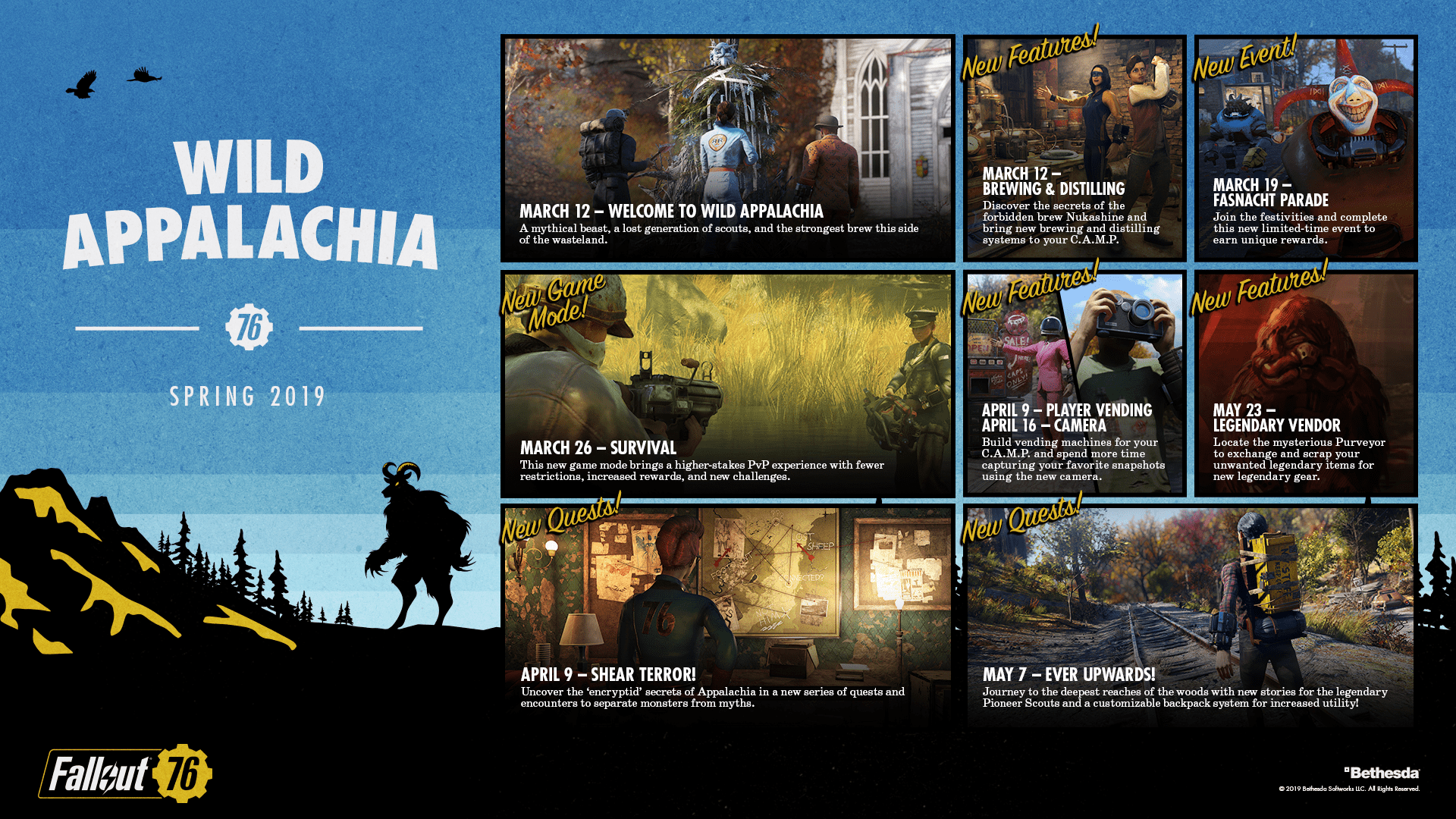 But where is the game now? As a day one player of Fallout 76 and avid Fallout fan, it’s always had this unique focus on the Fallout gameplay loop discovered in Fallout 4. Kill. Scavenge. Craft. Repeat. Where Destiny or Division have you always roaming and only focusing on your character, Fallout 76 is exceptional in that it has all that too (plus an RPG perk system) but the crafting element is so robust with special weapons and building your own settlement that it often masks the MMO side of things because your mind isn’t solely on your character, but the base. The game has played into that with new items being added, increases to your stash limit so you can hold more crafting materials, and changes to the CAMP system. Problem is at least in terms of people looking for that kind of raid experience or simply something non-crafting or CAMP focused, there’s not too much to offer. Until last week.

Bethesda put out the official Fallout 76 roadmap last week and to put it simply, it doesn’t disappoint. The upcoming update Wild Appalachia has new quests, events, player vending, brewing, and the long-awaited PVP oriented survival mode all coming out in March 2019. Not too much is known about the summer and fall updates Nuclear Winter and Wastelanders, but we do know there’s a new game mode, the Vaults will be opening for raids, and there’s a new prestige system for high-level players. Frankly, it’s kind of overwhelming. There’s so much that’s announced to come later this year, it outclasses the smaller updates and expansions prior games like Division and Destiny would put out (barring their yearly expansions) but with one key caveat; it’s free. 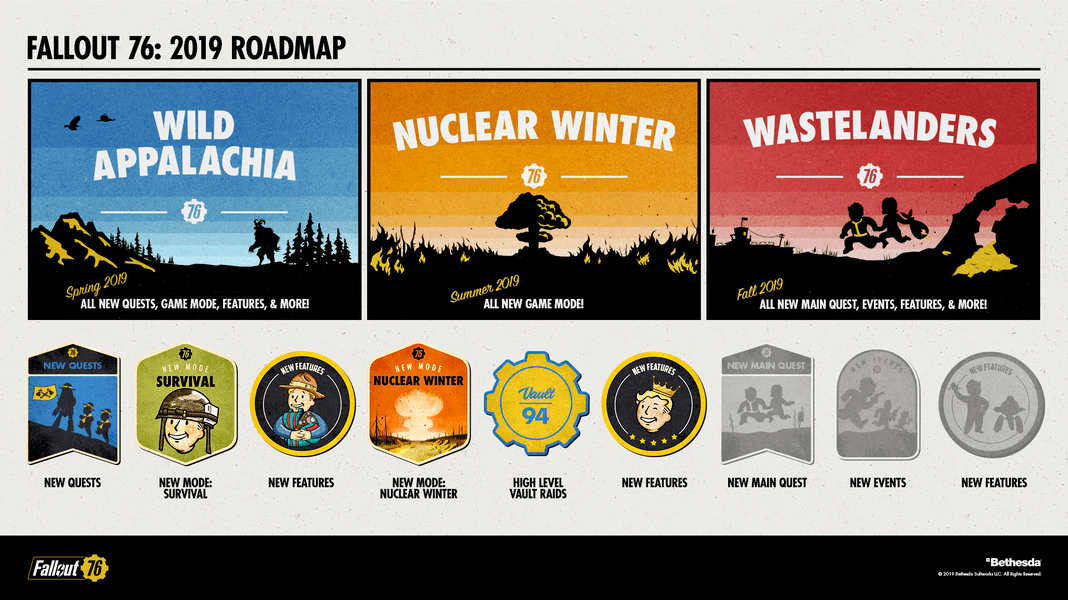 Yes, all these updates and expansions to Fallout 76 are planned to release to everyone, for free. No seasons pass required. If that doesn’t tell you Bethesda is committed to this game, then I don’t know what will. But the question remains, will this fix Fallout 76’s ailments? Yes and no. Those who have been dying for more endgame content specifically along the lines of a raid will no doubt be pleased. The crafters such as I will dig the brewing and player vending, but this doesn’t really address the Fallout traditionalists in the room. They love Fallout for the world they get to explore, and the expansions announced so far don’t really give them more land to roam. I’m not exactly sure how Bethesda will, or if they ever will, address this issue given the map size being so large at least without a formal expansion.

Long-term, Fallout 76 will need to keep producing this level of content to keep people invested since the PvE experience is the main flair of the game unless they introduce some strict PvP mode for players to throw their caps into. Either way, I’ll be tuned in and tending to my muttfruit and brewing my Nukashine.

For more gaming talk and a devoted band of brothers, tune into the Multiverse Show, live at 8 PM eastern time