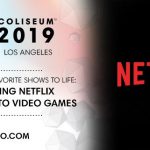 You are reading
Netflix Panel Headed to E3: What Can We Expect?

Netflix is ready to start making their rounds in the gaming community by announcing their attendance at E3 this year. On Twitter, E3 tweeted that Netflix would be hosting a panel at the convention. Netflix later on retweeted the announcement from their NXONNetflix account.

Heard the latest #E3Coliseum excitement? Come hear from the team at @NXOnNetflix for their panel at #E32019 – information here: https://t.co/6ohRvpa2Am pic.twitter.com/cSFpq9iyrS

The panel is geared towards “Bringing your favorite shows to life: Developing Netflix Originals into Videogames”. The announcement isn’t completely out of nowhere. Last year, Netflix announced Stranger Things 3: The Game would be released in July 2019. Stranger Things 3: The Game, which is being developed and published by BonusXP in collaboration with Netflix, is set to be a 16 bit styled adventure game and will be available on all major platforms.

I can’t imagine any insane news coming out of that panel like gaming on Netflix. Though in the wake of things like Bandersnatch, Netflix seems to be pushing the boundaries of interactivity on their platform. We can however expect additional games being announced from Netflix from their plethora of original content. Narcos, The Umbrella Academy and Lost in Space quickly come to mind.