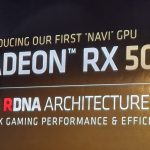 AMD held a keynote at Computex 2019 where they introduced a number of new products manufactured on 7nm node. They presented both new Zen 2 based Ryzen CPU and new NAVI GPU. During the show, AMD’s CEO Lisa Sue reconfirmed that PlayStation 5 will utilize both Zen 2 and a NAVI based Chip to power Sony’s Next Generation games.

This obviously means that Sony’s new console will be using the latest tech, that should allow for stunning visuals and very smooth gaming performance. We were expecting Zen 2 to offer quite a significant jump in performance over previous generations of Zen CPUs. However this totally new RDNA architecture for NAVI chips took us a little bit by surprise. There were many reports claiming that NAVI was to be the last GCN based card, but this doesn’t look to be the case. We have not seen too many details on the new architecture just yet, but we do know that it brings 25% IPC boost over latest GCN based cards, 50% better performance per watt, new PCIE 4.0 interface, and higher clock speeds. All this info means that even at lower TFlops count these chips should perform better than GCN based cards and consoles.

Lisa Sue also teased that the NAVI comes with new compute unit design and new Multi-level cache hierarchy – two fundamental changes that we have heard about if you have been following the latest leaks. The most recent leak states the new architecture will double the number of Shader Engines, and in effect double the number of Geometry Engines and ROPS. Aside from vague “new compute unit design” terminology, we have not learned much about the changes to the architecture from AMD just yet. AMD is planning to reveal more information on NAVI June 10th 3:00 pm PT during their E3 Next Horizon: Gaming presentation. They have already confirmed their first cards for the PC market should be out in July.

AMD also presented a quick benchmark comparing the new NAVI card against NVIDIA’s RTX 2070. According to AMD, the NAVI card beats NVIDIA’s by 10% in Strange Brigade which seems to be pretty impressive. This benchmark would confirm previous rumors suggesting NAVI chips to offer VEGA 64/GTX 1080 level of performance.

So how does this translate to potential PlayStation 5 performance? It’s too early to say that for sure. However, I will say that rumors of PS5 offering VEGA 64/GTX 1080 level of performance might be on point here. Until Sony releases full CPU and GPU specs this is just my educated guess here.