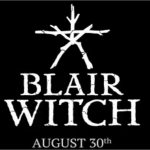 You are reading
Blair Witch is Not Actually Alan Wake 2

World Premiere footage of a new Blair Witch game dropped in the early part of Microsoft’s E3 Press Briefing. What many believed to be the sequel to the classic Alan Wake, is instead a sequel to a much different horror franchise. Looking equal parts Alan Wake and Silent Hill, the game showcased the trademark found footage angle of the original films. The main character is shown exploring a forest location with his dog companion while being pursued by an unseen force. The trailer ended with a seeming rewind back to the first scene of the trailer. This presents some rather interesting ideas on a time travel or rewind mechanic available to the player. Alternatively some run based mechanics more commonly found in roguelikes could be present. Either way, look for the spooks to be present when the game launches on August 30th this year where it will launch on Xbox Game Pass.

Hope you're not afraid of the dark. Blair Witch is coming soon to Xbox Game Pass for Console! #XboxE3 pic.twitter.com/0ycH1Koxnf