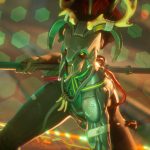 The Lords had the opportunity at E3 to interview the creative director of new game from Ninja Theory, Bleeding Edge. The 4 v 4 combat game wears its MOBA influences on its sleeve, but also gave the Lords some definite flashbacks to Power Stone.  They talked about body modifications, the studios approach to gameplay and story, and the inherent comedy of the game wrappings. Check out the interview below and keep it locked here for more interviews and gameplay impressions from the show floor.