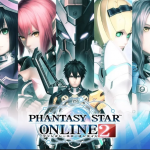 You are reading
Phantasy Star Online 2 Coming To PS4?

During an interview Giant Bomb, Phil Spencer said that the fan favorite game would come out to all platforms. So it looks like the game might be a timed exclusive and will come to PS4 and maybe switch sometime after the Xbox One release.

Phantasy Star Online 2 is a video game in the phantasy star series published by Sega. Western releases of these fan-favorite games rarely happen. The Japanese version released back in 2016 and a Vita version back in 2013. There is currently an unofficial English patch available for the PC Japanese version right now.