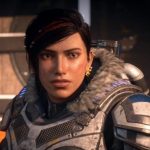 You are reading
Gears 5 Review

Rewind to 2006. Gears of War launches to critical praise and massive sales. Epic Games spends much of the Xbox 360’s lifespan building the Gears of War universe, culminating in 2011’s Gears of War 3. Fast forward to last Friday, September 6th, when the Coalition released Gears 5 onto Xbox Gamepass Ultimate. Gears 5 brings back the core gameplay that helped propel its rise to popularity but also new experiments. These experiments show mixed results, but the core gameplay and beautiful locations are ultimately worth getting on Gamepass.

Gears of War Campaign gets Inventive

One of the biggest changes from Gears of War 4 is the protagonist. In place of Marcus Fenix’s son, JD’s, story, we play through Kait Diaz’s story. Kait is JD’s squadmate who lost her mother in Gears 4 to the reincarnated Locust Horde, now called the Swarm. Since then, she’s had recurring nightmares about the Swarm, and sets off with another squadmate, Del, and the series beloved robot, Jack, to look for answers.

The Coalition gives Kait’s story due respect and diligence, but like other, major plotlines, cuts it too far short. Part of this blame is due to the campaign’s brevity. Gears 5 is a 10-hour commitment at the Intermediate Difficulty to complete the story and find about half of all collectibles, so completionists should expect at least another two and a half hours to find what remains. This is the shortest campaign in the Gears of War franchise, and it suffers from that length.

What’s even bigger and new are the open-world campaign levels. The campaign has two open-world acts (Acts II & III). Each act gives you a skiff to travel the furthest distances, and won’t let you travel too far from the skiff on foot. Gears 5 takes a bold step to evolve its formula that leaves players wanting more. On one hand, the open-world acts are a fresh and well-executed idea to bring to the franchise. These beautiful areas are chock-full of world-building collectibles that continues to describe what happened between Gears 3 and 4. Now, on the other hand, these levels leave the player wanting more. Collectibles dot the various locations spread out through the map. Since half of the acts are open world, that’s only twenty locations to explore. Open world levels worked so well for Gears 5 but deserved a bigger spotlight.

Gameplay is as Good as Ever

As with every main entry before it, Gears 5 is a third-person cover shooter. You can hide behind pillars or mounds while attacking your opponents with the ever-growing Gears of War arsenal. This game adds almost one new weapon of every kind. If you want to cause explosive damage, but don’t have any grenades, look for the Grenade Launcher Lancer (GL Lancer for short). Enemies moving too fast for you to keep up with? Cryo cannon. Getting swamped? Clear the field with a Breaker Mace. The new toys are fun to play with.

Several Quality-of-Life improvements come in here too. Enemies now have a health bar over them, multiplayer shows how much damage each bullet does, and so on and so forth. These improvements are seemingly small, but nice additions.

To complement the open-world levels, players can hunt for components to upgrade and unlock Jack’s active and passive abilities. Jack can also shock enemies and fetch items strewn across the battlefield at the player’s request. Further, he is a playable character in the campaign, but only in online co-op.

Gears 5 is the Best Looking Xbox One Game.

I cannot stress this enough, Gears 5 is beautiful. This game was designed for camera mode because there are so many picturesque views in the game. The locale could be a barren, icy lake, or a scorching red desert, or even an infested theatre. These areas are the type you would find on a postcard. Speaking of performance, hop over here to find our breakdown of the game’s performance by platform. In short, this might be the best looking game on the Xbox One X right now.

The Sound Team Did their Job

The sound effects add to the immersion and do their job. As a cover shooter, each weapon sounds distinguishable from each other, including the variant Lancers. These sound effects spark their appeal, such as the franchise’s iconic chainsaw rev. When you are exploring the open-world levels, the environment sounds real. The skiff slides across the frozen ice in Act Two and the thunder cracks with a vengeance in Act Three. Withstanding most sci-fi elements, these areas feel real.

Laura Bailey leads the voice talents as Kait Diaz and gets to show off more nuanced performances than in Gears 4. Supporting her is John DiMaggio, back as Marcus, Eugene Byrd as Del, Liam McIntyre as JD, and many others in smaller roles. Despite some overarching narrative choices, none of the lines of dialogue are bad. When going from point to point, characters will start up conversations about the world, the characters, or the plot, and it all feels natural.

Multiplayer is a Mixed Bag

Finally, we have multiplayer. Much like past games, Gears 5 has both PvP and PvE game modes, including the campaign. PvP, called Versus, has a multitude of different game modes such as your standard Team Deathmatch and King of the Hill, as well as Gears of War staples like Warzone. Each of these modes continues Gears excellence in competitive cover shooter games.

Horde mode returns, but not at its best. The beloved PvE mode is back, bringing wave after wave of opponents to kill until they kill you. Gears 5 brings back features from Gears 4 and introduces new ones, but they mostly get in the way. For example, enemies drop currency for weapons, fortifications, and upgrades when killed. If you don’t pick the currency up by the start of the next round, it’s gone forever. Gears 3 just gave us the currency for getting kills, which prevented bogging down that Horde Mode.

Second, fortifications are built from the Fabricator, and can be placed wherever you want. Sometimes, however, this means wrestling with the game object’s geometry. Going back to the Gears 3 comparison, the fortifications were already placed, streamlining the building process. It’s these unnecessary headaches that get in Horde’s own way. There is one bright spot, however; when a player leaves, they’re replaced by an AI, so you’re always playing with four other characters.

The newest mode is called Escape. Escape’s goal is obvious: escape the Swarm nest you just planted a venom bomb in. Like all multiplayer modes, players can choose their character, but Escape is the only mode where the characters have special abilities. These abilities force the players to cooperate and work with their team if they want to complete the level.  Escape also has a custom map-maker which lets you lay out the map, opponents, ammo, etc.. Like Super Mario Maker, a custom map will only go public if the creator can beat the map. The only issue here is the lack of a tutorial and well defined rules. While this mode may not be for every player, it is a welcome addition that will no doubt spark the Gears’ fandom’s creativity.

Even if you’re not the biggest Gears of War fan, go check this game out. It’s gorgeous, the gameplay is as good as ever, and the open-world levels are inventive. That doesn’t mean this game isn’t flawed, however. The campaign is woefully short and Horde Mode is a far cry from its past glory. If you have Game Pass or Game Pass Ultimate, absolutely give this game a chance.

8.3
Great, gorgeous fun despite its flaws.