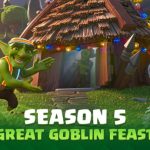 For the last few months, Clash Royale has radically adjusted its approach to new content by rolling out month long seasons for $4.99. Each season has a theme associated with it like last month’s spooky Halloween theme. Clash Royale Season 5, in keeping with the Thanksgiving North American holiday, has the Great Goblin Feast as its theme.

The Goblin Feast isn’t about turkeys and cornucopias though, and instead comes with disco balls and holiday light tower skins to really bring the festivities out. As always, the $4.99 season pass will double the number of crown chests able to be earned as well as offering an exclusive Dart Goblin emote and unlimited retries in challenges. 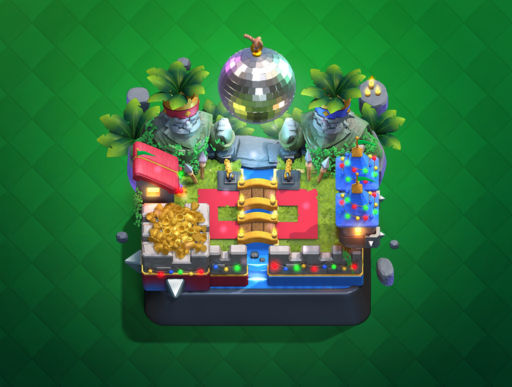 Tiebreakers are now in all game modes including 1v1 Ladder Matches. Whichever player has the highest tower hitpoints at the end of the match will win. Last season’s abyssmal new card the Elixir Golem is now available to be unlocked starting in Arena 11. This card is really only good for, nothing. It’s a terrible troop card and should not be used under any circumstances. Supercell just can’t seem to leave the Witch alone, and are now removing area damage entirely, so Minion Horde is now a viable counter. The skeleton spawn rate has also decreased. Wall Breakers are slightly less overpowered with their AOE damage being reduced by 1/4. Executioner, which was the belle of the ball last season has seen his axe radius decreased by 20% but range increased. It will be interesting to see if he and Tornado dominate the meta again this month.

For the complete list of balance changes, check out the full Clash Royale Season 5 release notes.