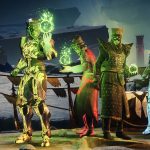 You are reading
Bungie Wants to See Your Tower Casuals

Tuesday saw the launch of the Festival of the Lost in Destiny: Shadowkeep, the annual Halloween event that turns the tower spooky. However, it isn’t just the tower that has gotten a little scarier. Bungie’s new dungeon the Pit of Heresy also launched. Time will tell if it holds up as well as the excellent Shattered Throne from last year’s Forsaken expansion. This three Guardian experience provides the next step in the ongoing narrative of Eris versus Her Nightmares.

The creepiness continues with the unveiling of the quest for the ‘bug gun’ which we now know to be called the Xenophage exotic, which does not appear to be performing as it’s supposed. In a Reddit post, Community Manager Cozmo confirmed that Xenophage is not supposed to do precision damage, but that other aspects of the weapon are not working as intended. Expect a patch for that soon.

In the spirit of the season, Bungie has been seeking out the most fashionable, the most superfly of Guardians to showcase their shader skills. Group or individual photos are permitted, and entries can be sent here. Prize winners will receive the above emblem as a show of their designer talents. Even if you aren’t submitting it is worth it to check out some of the amazing combinations put together by the community.

There are few things more controversial in Season of the Undying that the Pinnacle power grind. For those not yet to 950, the Pinnacle drops are the only way to increase the Guardian power level above 950. Currently there are only a couple activities that offer the ability to acquire these pinnacle drops, such as the Garden of Salvation raid. Bungie has acknowledged that Pinnacle drops are just not nearly as abundant as they need to be.  Players at the soft cap are not feeling meaningful progression so far. This is especially true since Pinnacle drops only drop at +1 above power level. This will change to being +2 starting on Thursday, November 7th. Furthermore, once you have filled four of the eight slots, normal powerful gear drops will then fill in the gaps. This should be a good compromise for top level players.

For more Destiny: Shadowkeep tune in for our weekly Destiny podcast breaking down all the latest changes on Destiny 2: Shadowkeep, The Last Word with Lord Cognito and Ebontis every Friday, your go-to looter shooter podcast.