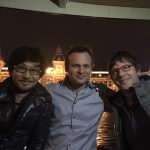 Today, was a big day in terms of internal shuffling in leadership for Sony’s PlayStation division. The first biggest announcement is that Hermen Hulst the big boss of Guerrilla Games will be taking over the role of head of PlayStations Worldwide Studios. The position was vacated just over a month ago when Shawn Layden departed the role in a very abrupt manner. Hermen Hulst no doubt brings a keen eye for quality, and a die-hard work ethic to the table. Guerilla Games has been on an absolute roll with Horizon Zero Dawn being one of the most successful new IPs of this generation. While also being paramount in helping Kojima Productions bring what seemed like a far away dream to reality as Death Stranding launches tomorrow. PlayStation boss Jim Ryan had this to say, in regards to Herman Hulst’s new role.

“Worldwide Studios is a critical part of the future success of the company, and we must deliver on the promise we have made to gamers to create imaginative and exciting content that is truly unique to PlayStation. I have no doubt Hermen can lead our teams to deliver compelling and diverse experiences at a steady cadence.”

Sony’s Worldwide Studios will no doubt be in good hands under Hermen’s leadership. With a vote of confidence from PlayStation’s new boss, it is no doubt that leadership feels that this is the best choice for the company going forward. Along with this news, we also learned that Shuhei Yoshida, who currently sits as President of Sony’s WWS will be taking on a different role going forward. Yoshida will be in charge of PlayStation relationships with 3rd party indie developers. This role is certainly something Yoshida will adapt to, as it has been quite apparent over the years that he enjoys meeting and interacting with developers of all sizes. It is my personal hope that with Yoshida in charge we can start to see improvements in Sony’s relationships with smaller developers. With many Indie developers feeling left behind in the past few years by PlayStation, the road may be difficult but Mr. Yoshida definitely has the talent to bring it all back together.

While the internal shuffling continues at PlayStation, seeing familiar and hardworking faces continue to move through the company sets many people’s worries to rest. Could more changes be coming in the future? Only time will tell.