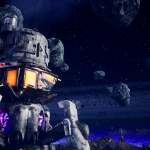 Storytelling in games has come a long way this generation. Developers have poured time, money, and manpower into creating stories that engage players and make us want to seek out the next horizon. These are the stories that spoke to us on a fundamental level. The stories that taught us something about our humanity and the world we live in. The gaming community was able to see some of the best developers in the world release their first games in years and the worlds we experienced were well worth the wait. Stories would be nothing without characters, which we celebrated earlier this week. However, a story is the journey you go on as the player. With that in mind, these are the games whose fables spoke to us, these are our winners for 2019’s Story of the Year.

To say that Obsidian Games are master storytellers is truly an understatement. The Outer Worlds is the latest foray from the seasoned development studio. It beautifully epitomizes the story-telling caliber of the game developer. The Outer Worlds’ story material is unique. No, there is no zombie apocalypse or extremists out to destroy civilization. Instead, corporate greed and suspicions are central to the antagonists’ motivations in the game. While The Outer Worlds doesn’t reinvent the wheel when it comes to Western RPGs, its reception shows how gamers have longed for these traditional types of games.

Dialogue truly matters in Obsidian’s latest outing. We can say with full confidence that it is well worth experimenting with dialogue choice. The way they affect the overall story, player relations with companions, and other events is a wonderful treat. Not only can players alter their in-game playing style, they can also change how they are perceived in Halcyon, making every play-through unique. Do you want to focus on melee and not give two damns about your companions? Go ahead! Or do you prefer to play stealthily and maintain cordial relations with each of the two dozen or so corporations found in the game? Again, that’s up to you!

Another facet that makes The Outer Worlds’ story captivating is the attention to detail in the lore. Many games divulge text-based lore and litter it throughout their games. The difference is in how personalized and well-crafted it is in Obsidian’s latest RPG. Each corporation or faction feels distinct and oozes personality. Their members meticulously support and propagate the corporation’s propaganda.  Do you want to support Monarch Stellar Industries gain independence? Or will you side with the revolutionary Iconoclasts and overthrow corporate presence on the untamed planet of Monarch? That, again is up to you. All in all, we here at the Lords of Gaming feel that the immersive and unique narrative found within The Outer Worlds is 2019’s best story in a video game.

Death Stranding, is Kojima’s first game outside of Konami’s branding. While after Metal Gear Solid V: Phantom Pain, I had concerns about the direction of Death Stranding. However, I was blown away by how the story came together, and had instantly memorable characters. Higgs will go down as one of Kojima’s best villains, which considering his history is saying something. The story is one of his most concise to date, and is a must play experience from this year.

We’ve waited a long time for this. EA’s first single player Star Wars game did not disappoint, thanks in part to Respawn’s well-crafted story about a survivor. Cal’s journey to rediscover his connection with the Force, paired with his newfound crew’s past, creates a compelling story of self-rediscovery. Further, Respawn stray from traditional Star Wars morally clear cut plots for grayer themes. That said, Respawn leans into the Hero’s Journey lens much like the original Star Wars story famously did. This kind of iconography combined with incredibly memorable and endearing characters created something special. If job listings are any indicator, we’ll be getting more Star Wars content from Respawn soon, and we’ll be all the better for it.