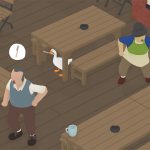 One of the things we at Lords of Gaming love most about gaming is the versatility of the medium. Games can be anything for anyone. From games with no character at all, like Tetris to games that hinge entirely on character like The Walking Dead, games are able to serve all kinds of audiences. In the last generation, characters have come to life through improvements in voice acting, motion and performance capture, and more commitment to writing diverse characters that reflect the diverse audience. Over the course of 2019, characters have captured our interest, our imagination, and our friendship. So, with that in mind, these are the winners for Lords of Gaming’s 2019 Award for Character of the Year.

It was a no-brainer to nominate the Goose from Untitled Goose Game as the Best Character of the Year. Goose Game became a viral social media hit that made every influencer that has ever influenced anything run to the eShop. Goose Game was a gaming community celebration on social media measurable with Baby Yoda. Goose lives up to the hype. I find myself stopping to laugh at the mannerisms that balance in between Metal Goose Solid and MTV’s Jackass. How can anyone deny the charm and humor of Untitled Goose Game? The Goose is unlike any character that has come before and harkens back to the glory days of vaudeville comedy. Few games can so effectively make a character with no dialogue, but developer House House succeeded against all odds.

Runner Up: Parvati from The Outer Worlds

A good character makes you want to root for them, but a great character makes you think. Parvati from Obsidian Entertainment’s The Outer Worlds does both. You meet her as a nervous and shy employee of the Edgewater colony. Her boss lets her join you, and you go on to help her find romantic interest, and in turn, she makes you think twice about a major, early decision. Of all the characters who join your crew, Parvati feels the most relatable and shines brightest when she makes you rethink your decisions.

Star Wars has a knack for introducing the adorable BFF droids we all love. First with RD-D2, then again with BB-8, and now with BD-1. While Cal himself is a great protagonist, it’s his best bud BD-1 that steals the show. His whimsical, almost naive, character brings levity to tense situations and is as loyal as man’s best friend. BD-1 is a worthy companion for any adventure, and its for that reason he is one of our runner ups for Character of the Year.