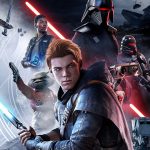 EA’s recent history with the Star Wars video game franchise has been… disheartening to say the least. After the critical panning of their Battlefront games, the company has been put in the spotlight for blemishing the Star Wars name in video games. With that said, a lot was riding on the next iteration developed by Respawn Entertainment, Jedi: Fallen Order. Breaking their first-person shooter trend, Jedi: Fallen Order is Respawn’s first attempt at a third-person action adventure game. By taking the best of the genre’s modern flair, the studio has delivered an absolutely spectacular Star Wars adventure. Despite some frequent technical hiccups, Respawn has set a new standard for the franchise’s history in video games.

A handful of years has passed since the execution of Order 66, a ruthless command given to the Clone Troopers to betray and brutally wipe out their Jedi comrades. Due to these unexpected circumstances, a small number of Jedi who were lucky enough to survive are now in hiding. They have essentially abandoned their long-standing virtuous Jedi tradition just to survive. Some lie in wait, while others have replaced their lightsabers with junker tools.

The Force Is Strong With This One

It’s here we’re introduced to Cal Kestis, Fallen Order‘s protagonist and Jedi in hiding. Cal works alongside other scrappers on Bracca, breaking off and selling parts of war-torn galactic battle ships. In a life-or-death freak accident, Cal instinctively calls on the Force to save a friend. Unfortunately, it doesn’t take long for the Empire’s inquisitors to come knocking. Fleeing in a desperate escape, Cal comes across two travellers- Cere Junda and Greez Dritus. Soon after, we get to meet Cal’s adorable droid sidekick BD-1. Together, they decide to rebuild the fallen Jedi order by locating and gathering Force-sensitives across the galaxy. What follows is a heartfelt and true-to-nature Star Wars story with riveting action set pieces and genuinely interesting heroes and villains

Taking into consideration Fallen Order is set in the most dangerous time to be a Jedi, the stakes couldn’t be higher. While Cal understands the gravity of his situation, he has yet to fully mature. He’s naive and young, yet determined and full of energy. At first, Cal was just a huge dork. He also seemingly didn’t bring much to the table. Cere and the villain characters carried the game in the early hours. However, the more I played, the more I was rooting for Cal. He may initially feel inadequate as a Jedi, but I truly believe he couldn’t be any more equipped to earn the title. While Fallen Order has a lot of story elements, it’s essentially Cal’s coming-of-age journey that will have you cheering by the end.

Jedi: Fallen Order is set up for a 20-ish hour experience that embraces the exploration similar to Metroidvania games, the combat style of Dark Souls, and the cinematic presentation of Uncharted. The game doesn’t take long to throw us into its scripted action-packed intro that undoubtedly impresses story-wise and as a tutorial.

Unlike most Star Wars games, Jedi: Fallen Order asks the player to think before acting, much like a Jedi. Yes, Stormtroopers can die in one to three hits, but resist the urge to go in swinging. Enemies can overwhelm Cal and get the better of him, so it pays off to be more deliberate and defensive. You will get the occasional AI that just stand there, but playing on the Hard difficulty gave enemies the needed aggressiveness to keep me on my toes. The same goes for monsters you’ll come across. Every enemy also has an attack highlighted in red that you need to dodge, making movement just as important as blocking with your lightsaber.

The Rise of Parries

Enemies also have a parry bar, which can be depleted with light and strong attacks or correctly timing blocks. Besides Cal’s Force powers, the parry mechanic is essential to some victories, especially the final boss of the game. Speaking of Force powers, the game has a gradual progression of earning them. The famous Force push and pull serve more as exploration tools than for combat. Respawn understands that Force powers are easy wins. The solution is so they’re limited with a meter than can only recharge with light attacks and well-timed parries.

The flexibility of combat boils down to something incredibly fun and satisfying to pull off. There were a number of times where an elite Stormtrooper and Cal were a hit away from dying, and only quick-thinking dodges and parries were the deciding factors to winning. Controlling Cal in these situations, and especially lightsaber battles against bosses, is the closest I felt to how epic they’re portrayed in the prequel movies. Eventually, you’ll be pulling off sick lightsaber stunts like this.

Fallen Order‘s combat is only half the work of the game’s fun factor however. The other half of why it works so well is in the  sound design. Similar to DICE’s Battlefront II, Respawn has completely nailed the iconic sounds of Star Wars. The sheathing and unsheathing of lightsabers, blasters, the quirky buzzes and sizzles of lightsabers as they swing and make contact; all of it is what we unconsciously love about Star Wars.

The only stagnation for combat is its progression. Players can utilize a skill tree that does add some needed variety, but none of the abilities feel substantial enough. The strategies I used at the beginning of the game were the same by the end of it. I already felt powerful at the get-go and the Fallen Order coasted on that wave, emphasizing its exploration progression and character development more.

Revenge of the Metroidvania

Respawn’s gameplay hook is unlocking sections of large maps with various puzzles using powers you have, will have, or abilities BD-1 eventually obtains. Once you recognize what you’ve unlocked, your brain instantly clicks to where you’ve seen the blocked off path you came across that you can now access. This cycle plays on gamer’s curiosity and fans’ interest to see more of the Star Wars universe and I love it. The feeling of discovery kept me playing for hours, even if getting there was troublesome.

Platforming is quite wonky in Fallen Order. It’s not something that ruins exploration, but committing to risky jumps and rope swings feel more like a gamble than it should. For instance, I had to redo one sliding segment multiple times due to the sensitive movements with the analog stick that completely threw off my accuracy. Uncomfortable platforming controls are the least concerning aspect for Jedi: Fall Order unfortunately.

The load times can be pretty long, reaching up to nearly 30 seconds.

Attack of the Bugs

It’s disappointing that most of Jedi: Fallen Order‘s problems are technical issues. It’s crystal clear that this game needed to bake in the development oven for a couple more months. Coming from a gamer who rarely runs into technical problems, Fallen Order gave me a laundry list on PS4 Pro.

Some glitches and bugs can be overlooked, especially for a game of this scope. Sadly, they happen so frequent in Fallen Order that it definitely dampened some really cool moments and reveals. In the first world Cal visits, there are heavy framerate issues paired with tons of blurry textures followed by pop-in. Clothing clips through character models , but more frustratingly, Cal will clip through platforms, and the list goes on. Thankfully, the game only crashed once. Fallen Order, at its launch state, is a technical mess, which sucks to say considering how great the core game is. However, those willing to pay $60 deserve better than a “fix it later” patch.

As someone who enjoys select Star Wars tracks but never really reveled in them, Fallen Order‘s music blew me away. Its soundtrack completely embodies the DNA of Star Wars with whimsical exploration tunes and dramatic impact that heighten story moments. The music paired with the pitch perfect sound design creates a level of immersion that so few games can do. It’s as if the controller floated out of my hands once I got into the action.

A big nod for setting immersion also has to go to Fallen Order‘s visuals. While it’s not the best looking game on PS4 Pro, detailed character models animate beautifully. Respawn did an excellent job choosing which planets to traverse as well. Each planet Cal visits is huge and filled with its own unique personality.

One of my favorite aspects the game’s visuals is the customization. Throughout Cal’s adventure, he’ll come across unlockable chests containing a color variance for either his clothing, BD-1, his space ship, or his lightsaber. The occasional color swap has some nice personality flair to it, but the real attachment comes with your custom lightsaber. Here are some of my favorites I made over the course of the game:

Best of all, all of these cosmetics are unlockable by simply playing the game. No extra money required.

Return of the Jedi

Personally, I was extremely skeptical of another Star Wars game backed by EA no matter who the developer was. After completing Fallen Order, my worries have vanished. Jedi: Fallen Order is a stunning achievement that brings back hope for the potential of Star Wars video games. It embraces the majestic wonder of the franchise and reminds us why the series is perfect for the medium. I just wish the game were as polished technically as it is fun to play and be a part of. Regardless, Jedi: Fallen Order wraps magnetic storytelling, a strong gameplay core, and the personality of Star Wars into one of the best video games of 2019.