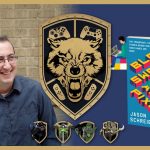 00:50- @LordCognito starts off the week’s “Lordly Introductions” with this week’s special guest & one of the most influential investigative game journalists in the business: Lord Jason Schreier

22:45- Lord Jason gives his thoughts on the current state of gaming journalism & “The Youtube Provocateur” !

27:55- @LordCognito asks Jason Schreier the question that everyone wants to know! Does “Media Bias” exist and how Lord Jason handles everything that comes along with that polarizing subject!

38:30- Lord Jason talks about his book #BloodSweatAndPixels ! The Lords also take some questions from the chat!

53:00- Keeping in mind the major expose that Jason Schreier wrote last year, the Lords ask Lord Jason his thoughts about the current state of #Anthem & #Bioware!

01:21:50- After some reflecting on the monumental @jasonschrier interview, the Lords move on to last week’s results for the Official ILP Twitter Poll!

01:26:20- The Lords discuss breaking news that Sony will be shutting down their official forums starting February 27!

01:33:10- With the recent news of NAND & Memory Shortages in China as a result of Samsung S20 using similar parts, The Lords discuss how this might affect the release and pricing of the #PS5 & #XboxSeriesX !

02:35:05- The Lords discuss everything around GeoffKeighley ‘s announcement that he was not going to be attending #E32020 !

02:49:55- The new question for the Official ILP Twitter Poll is up for the week!