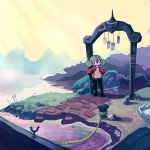 The staff of Lords of Gaming was on hand at PAX East bringing you coverage of a huge swath of indie games. Peter was able to catch up with one half of the two-man development team at SFB games, Tom to talk about their new game, Tangle Tower. SFB games is well known to Switch players as the developer behind the hit launch title, Snipperclips.

Tangle Tower is a Professor Layton style murder mystery puzzle game. However, this is not your average murder mystery, with one of the prime suspects is a portrait. Check out the interview below.

Tangle Tower is out now on Nintendo Switch and PC.