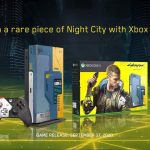 Official Xbox social media accounts were teasing something with a Cyberpunk 2077 twist to it. And now, we know what it is.

Xbox teamed up with CD Projekt Red to design a limited edition Cyberpunk 2077 Xbox One X. The console will sport laser-etched markings, LEDs and custom panels inspired by the game’s futuristic dystopia.

The bundle also comes with a unique two-toned Xbox One controller, which also takes notes from the game. The limited-edition console will come bundled with the game and will be available this June ahead of the game’s release.

CD Projekt Red did recently claim that the game is still on point to release on September 17, 2020, on Xbox One, PC, PS4 and next-generation consoles.