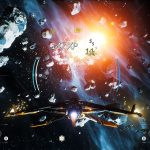 You are reading
Everspace 2 Early Impressions

We were given the opportunity to play a prototype build of Everspace 2, an arcade space combat game from ROCKFISH Games. We had previously seen the game at PAX East and interviewed Community Ambassador Eric Schrader. Everspace 2 was successfully Kickstarted earlier this year to the tune of €500,000. The vertical slice shown took about 3 hours to run through all the available content, with some exploration tacked on for good measure. Overall, we came away impressed, with some minor concerns.

The build we played gave access to three different systems, each with their own unique hook. One had a pirate base that I was tasked to destroy completely with turrets, shield generators, and enemy fighters. The second was a trading outpost. Here a pirate capital ship dropped out of warp as I approached the warp gate. The final area is an asteroid field surrounding a ringed planet. Each of the backdrops is stunningly gorgeous and there is a not-insignificant amount of disappointment that you can’t travel to investigate some of them more closely. The random events and sense of discovery is the best part of the game so far. The capital ship out of the warp gate is clearly a scripted sequence, but it made the world feel alive in a way going against the static pirate base did not. 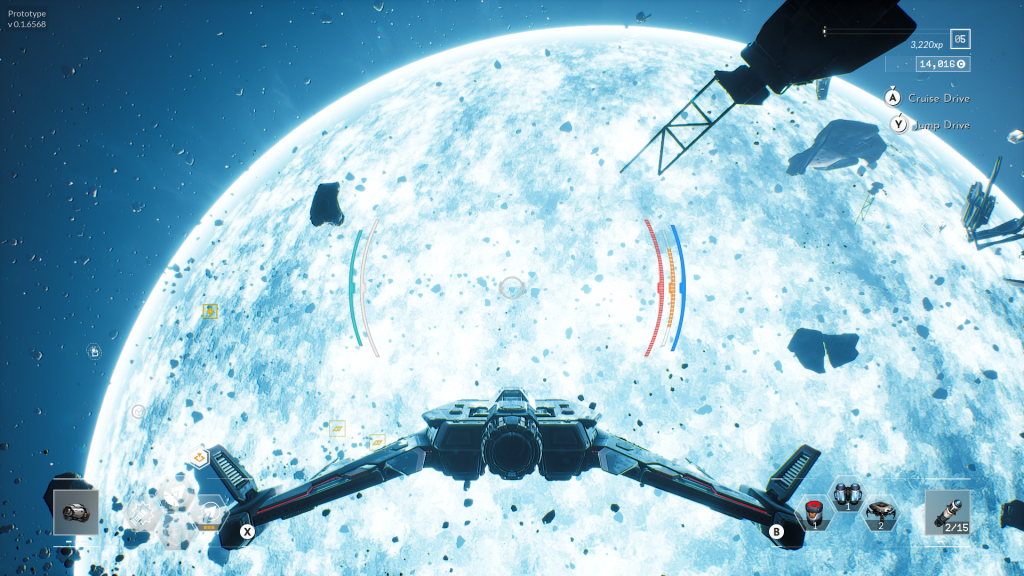 Given its status as an early build of the game, Everspace 2 has an absolutely impressive level of polish. From the ship design to the weapon sound effects, to the absolutely stunning backdrops, everything pops off the screen. The game runs silky smooth at ultra settings on a Ryzen 5 2600. A stable framerate is a requirement for shooters of any kind and there wasn’t a hitch to be found. The laser light show from a dozen friendly ships fighting with an equal number of foes makes for a pretty spectacular display. The ships handle great, though given that all three are the same class, they felt a little same-y. The big differentiating factor is the special abilities of each ship. 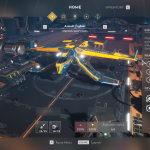 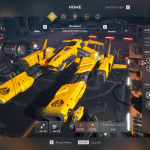 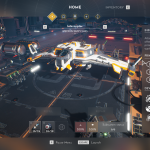 In particular, I found the EMP to be invaluable for getting up close with enemy fighters. A particularly nice ambient touch happened when I triggered the EMP with friendly fighters nearby. It disabled them and then turned them hostile towards me. It’s the little touches like that which make Everspace 2 shine.

The biggest problem with the demo is the best problem any game in early development can have, which is that there wasn’t enough of it. Three hours blew by and I still found myself going back and poking around the massive asteroids and derelict spacecraft. These are prime locations, after all, for secrets and loot. The game’s loot system is a little clunky at the moment. A simple grid shows the available space for the drops you get from defeating enemies, blowing up turrets, and exploring in the world. A handy summon all feature will bring all the nearby loot to you. This is a godsend since right now you have to be a little too close, and a little too precise in your targeting for my tastes. Loosening up these restrictions wouldn’t hurt the game, but would make for a smoother play experience. It isn’t immediately clear which gear is needed for ship upgrades and which can be scrapped. Given the limited nature of the demo though, this is sure to be fleshed out in the full game.

The dialogue also will definitely need another pass. Both the player pilot and the NPCs lean heavily into campiness, which may be a function of the translation from German. However, it came across as more eye-rolling than nostalgic.

Everspace 2 is coming to Steam Early Access in December 2020.