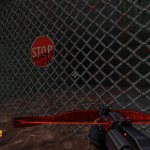 Ion Fury is a throwback to the 1990’s PC FPS glory days. While many Indie developers have taken this old formula and created something new and brilliant. A perfect example of this is of course games like Dusk and Amid Evil. However, for every good game, there are a dozen mediocre titles. As someone who was born and raised in retro FPS. I am always very critical of someone creating a game in this “classic” formula. How does Ion Fury stack up, and does it bring anything special or new to the table?

The story is pretty standard FPS fare. You are a cop having a drink at your favorite watering hole when evil scientist Dr. Heskel unleashes his cybernetic army upon the DC district. Your job quickly becomes to kill the doctor and put an end to his evil plans.  You spend the entire game blasting and smashing through a Cyberpunk version of DC. Like many old school FPS games, the story takes a back seat to the gameplay. But the setting and world-building is very well done. However, one of the most interesting twists of the game is that you play a woman. You control foul-mouthed, gun-wielding Shelly “Bombshell” Harrison. She is quick to make sexual innuendos at a moment’s notice and let out dirty one-liners. This quickly evokes the spirit of the master of kicking ass and chewing bubble gum himself, Duke Nukem.

While the humor is there, and I had a few decent laughs at some of the throwback easter eggs, most of the jokes felt already played out, or borderline stereotypical. Instead of making Shelly her own interesting take on the genre. She quickly became a Duke clone spouting off one-liners that fell brutally short most of the time. There was a real opportunity to have a commentary on these kinds of action movie stars and the game just doesn’t take it. While in FPS games like this, the story isn’t king. A good protagonist can certainly help lift a game from simply being good, to making it absolutely amazing.

One of the most intriguing aspects of Ion Fury is that it is created in the Build engine. Which is the original engine that led to the creation of games such as Duke Nukem 3D, Blood, and Shadow Warrior. Ion Fury is actually crafted around the source code for Duke Nukem 3D, in a similar fashion to another retro FPS from 1997 called Redneck Rampage. There hasn’t been a full game launched in the Build engine in almost two decades. This causes Ion Fury to really pull you into that old school vibe. As a long time Duke Nukem fan, it felt like comfort food in video game form. The 2.5D style of this era really feels timeless to me, and no matter how many times I play a game in this style it’s always enticing. 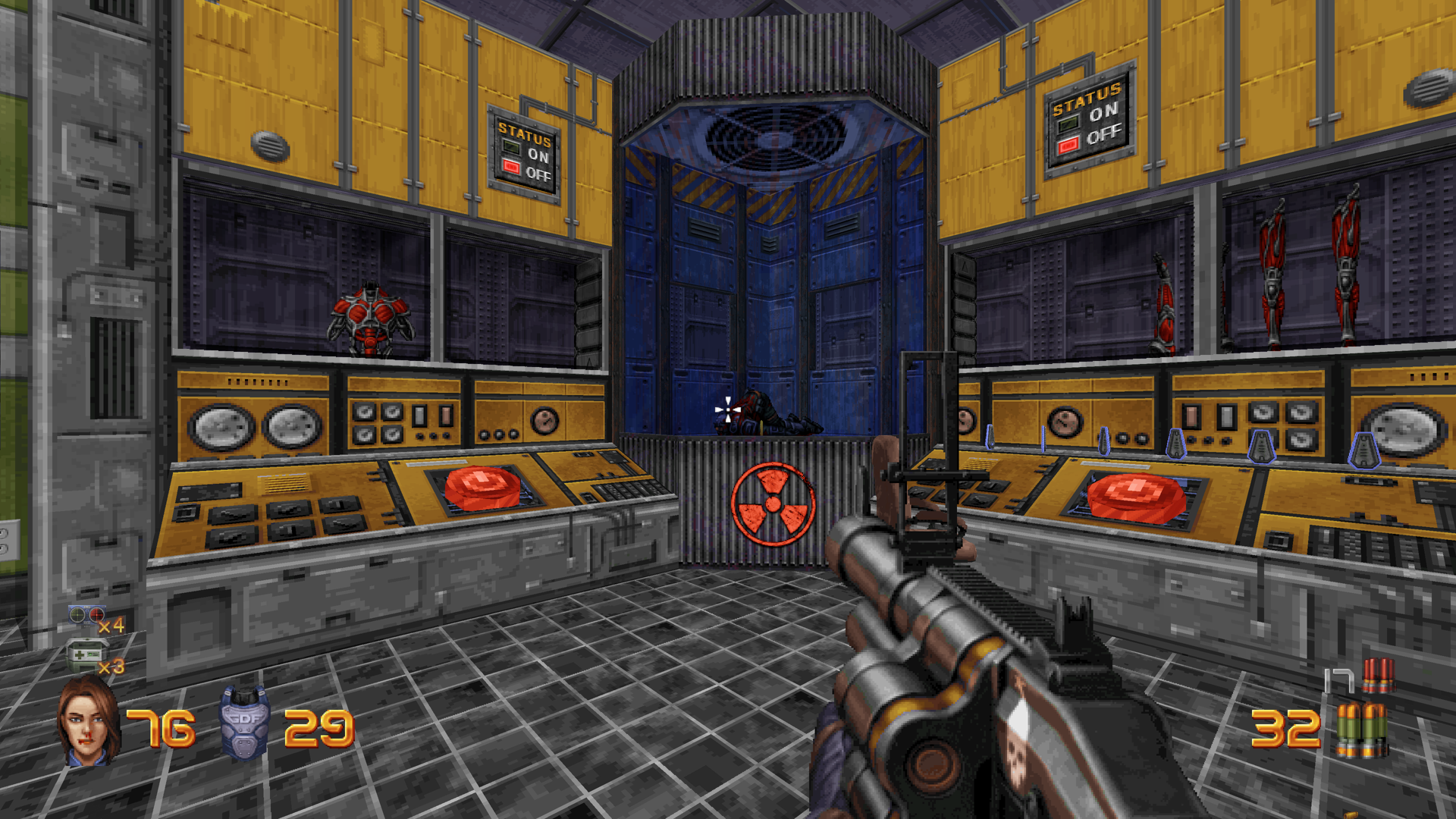 In terms of game performance, overall the game performed with few issues. I played the game on Xbox One X and only came away with one minor complaint: frame rate drops. Early on in the game, there were a few very noticeable areas where the framerate would chug. This issue smoothed itself out as the game progressed, with no other performance hitches of note.  Boss battles in the later levels certainly impressed with the volume of enemies on screen with no framerate drop to be seen. My framerate issue could be a one-off, but it is certainly worth noting. Otherwise, the game is pleasant front to back play in terms of performance.

The FPS genre can deliver such a fast and action-packed experience and 90’s FPS games had a heavy emphasis on speed and killing efficiently. Ion Fury definitely captures this in a beautiful way. The gunplay is smooth and features some absolutely amazing weapons. From a shotgun, that with a quick reload becomes your grenade launcher. To a tri-barrelled revolver which may be one of my favorite handguns in an FPS in recent memories. With the ability to fan hammer and mark multiple targets, it delivered a real Western gunslinger feel.  I cannot talk about the weapons in this game without mentioning the crossbow. A single shot to the head is all it takes for many enemies to end up dead at your feet. This isn’t exactly unique, but the addition of an alternative fire button that charges up and releases a barrage of bolts to strike down multiple enemies makes the crossbow an absolute joy to use. The weapons and their mix of alternative fires provide an insanely fun experience, as you constantly change and cycle weapons. 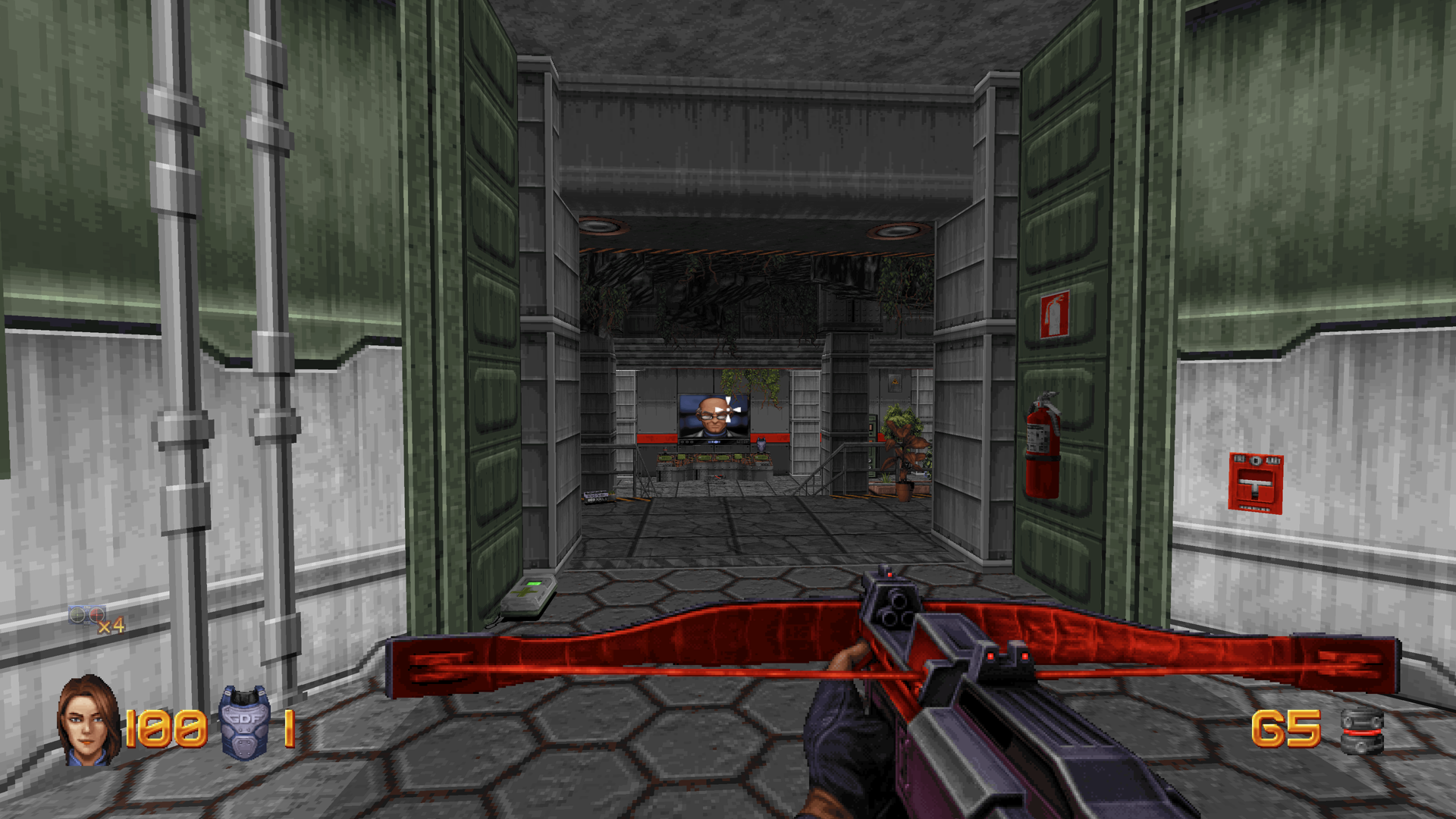 The level design in Ion Fury is fantastic, as it always has the player looking for more. The game is not shy in making certain ammo scarce to find, especially on higher difficulties. As a result, you end up combing each level for more resources. which leads to finding easter eggs, and cool little nods to other games from this era. Games often try to make players explore each level via the use of collectibles, which more often then not feels more tedious than anything. But finding secret stashes filled with massive amounts of ammo and armor filled with fan service? It was honestly one of my favorite aspects of Ion Fury.

I also applaud Ion Fury on its diverse variety of enemies that all have specific weapons that seem to hard counter them. You cannot simply grenade launcher your way through every foe, or just use the shotgun. In a single encounter, you might switch between 3 or 4 weapons in order to survive. The game isn’t afraid to throw massive amounts of enemies at you. In the finale of the first chapter, the game throws every enemy you have encountered so far in waves. You will find yourself using every last bullet in order to vanquish every foe that you face. Which offers a challenge even to the most seasoned FPS veteran. The core gameplay loop is where Ion Fury really shines.

The games’ soundtrack was serviceable. I don’t mean that it is bad, but it certainly didn’t leave an impression on me. While 90’s FPS games were heavily focused on fast-paced action, one thing they always had was a killer soundtrack. Unfortunately, in Ion Fury the soundtrack fades into the background quite often, making it ultimately forgettable overall. This also goes for the voice acting, while the interactions between Shelly and Heskel have their chuckle moments, ultimately the performances feel phoned in.

What Ion Fury lacks in the soundtrack, it makes up for in the games overall audio design. You feel every shot that you fire no matter what weapon you are using. Listening to grenade tubes ricochet off walls to eventually explode is audio porn to me. Hearing the minigun spin up as you unleash a hail of bullets on your enemies feels powerful. Each weapon has its own unique and distinct sound that makes them instantly recognizable. Especially when the weapons are used against you. One of the most horrifying sounds in the game was in a sewer section of the game. If you shot the zombies with the incendiary SMG rounds, the screams will forever be burned into your soul.

Ion Fury is a snapshot of the 90’s fps design. While some of it has aged incredibly well, other aspects feel dated and miss the mark. While the story and soundtrack are not going to get any awards. The gameplay loop at its core is just as addictive as its influences. With breakneck FPS action, filled with a wide variety of enemies. The game is a blast if you are a fan of retro FPS games.  There are very few retro FPS’s on Xbox and PlayStation 4 so if you don’t own a PC but want to experience a blast to the past then Ion Fury is easy to recommend.