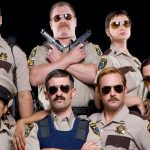 You are reading
Reno 911 Returns on Quibi

If you’re like me you spent plenty of time watching the Reno Sheriffs Department on their hit show Reno 911. The comedy ending with a mediocre movie that I don’t really recommend to anyone. The show went off the air and many fans were left with nothing but reruns with Terry skating around in back alleys. Now the streaming service Quibi has relaunched the show.

If you’re asking yourself “What is Quibi?”, this is a new streaming service that has shows build around the idea that creators can jam an episode into ten minutes. So far many of the shows have been decent to watch. That is until May 4th, the seventh season of Reno 911 was launched on the service. Fans will get a free 14-day trial to check out the other shows available. Personally, I would just wait to watch the new episodes of Reno 911. The show originally ran from July 2003 to July 2009 and consisted of 91 episodes. Take a peek at the launch trailer for the seventh season.

Currently, as I write this only four episodes have been released. One episode a day will be released until all twelve are out for fans to enjoy. There hasn’t been any news of an eighth season or even more episodes in this season. So go out and jump on that free trial to catch up on these episodes, they go back so quickly. Also a quick note, the original cast has come back for this show. You may notice that some have changed a little while other characters look exactly the same.

Did you know that John Wick 4 is one of the many movies that won’t be making its original release date? Take a look at what other Lionsgate movies got pushed back.