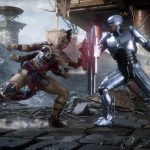 Shown off in a funky new trailer is more downloadable content coming to NetherRealm’s latest fighting game, Mortal Kombat 11. Below, you can catch a glimpse of the game’s new story-based content as well as a tease for its next guest characters, Robocop.

Aftermath is set after the events of Mortal Kombat 11 and begins right after its finale. Players who purchase the DLC will have access to the new story addition plus the three new characters coming to the game. Along with Robocop, MK veterans will quickly identify two characters from the series that make a return: Fujin and Sheeva.

Coming to MK11 players for free are new stage fatalities, Friendships (goofy fight finishers similar to MK9’s Babalities), and new stages. A bundle will also be available soon packaging the game, its prior Kombat Pack DLC, and Aftermath. Those who pre-order will snag the Eternal Klash Skin Pack for alternate looks to Frost, Scorpion, and Sub-Zero. Players can download the DLC on May 26.

What do you think of the new expansion for MK11? Will you be picking it up? Let us know in the comments.