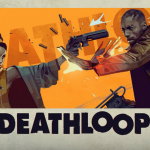 Deathloop was revealed during today’s PlayStation 5 reveal event. Developed by Arkane Lyon Studio and published by Bethesda Game Studios, the game features similar visual cues from the Dishonored franchise with a Groundhog Day‘s twist. That should be a given seeing that was the developer’s previous title.

From the team at Arkane Lyon comes an innovative take on first-person action. “DEATHLOOP” transports players to the lawless island of Blackreef in an eternal struggle between two extraordinary assassins. Explore stunning environments and meticulously designed levels in an immersive gameplay experience that lets you approach every situation any way you like. Hunt down targets all over the island in an effort to put an end to the cycle once and for all, and remember, if at first you don’t succeed… die, die again.

Expect to sneak, shoot, and slide your way through a demented city that can’t stop partying. There are eight targets that have to be killed before midnight. Sounds easy enough right? Except you’re stalked by a fierce sniper throughout Deathloop. However, no word yet when the game will be released.

Stay tuned with Lords of Gaming for the latest video game news and insights.