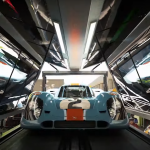 During Sony’s Future of Gaming event, Gran Turismo 7 was revealed along with a gameplay trailer.

Kazunori Yamauchi of Polyphony Digital appeared on screen to deliver the news that a new Gran Turismo game is coming to Playstation 5. Players can catch a few minutes of the latest entry in the series making a return on the next-gen console. The new racing sim showed off a number of cars and tracks players will be able to control.

Watch the latest trailer in 4K below:

The last game in the racing sim series was Gran Turismo Sport in 2017.

Stay tuned to LordsofGaming.net for more coverage on the PS5 event.