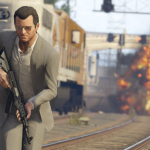 Rockstar’s GTA V kicked off Sony’s PlayStation 5 reveal event with a bang. Everyone who already owns the game on PS4 will be getting the PS5 version free of charge. In addition to that, they’ll also be getting $1 million in-game currency for GTA Online every month until the game is released on PlayStation 5. So expect an influx of multi-millionaires by the time the enhanced version is released next year.

Sony didn’t yet provide details of how GTA V will make use of PlayStation 5’s additional power and technology. But, one can speculate that the game will likely feature higher and more stable frames along with snappier loading. Although the game released way back in November  2013, it’s still going strong. GTA Online has been a massive hit and continues to chart to this day.