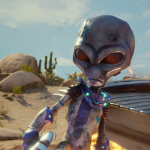 You are reading
Destroy All Humans Probing In Hot – Review

Destroy All Humans was a cult classic from 2005. It originally released on the original Xbox, and the PlayStation 2. The game followed Crypton-137 on his quest as he tried to learn more about the inhabitants of Earth. The game featured a fun gameplay loop that mixed a variety of weapons, and powers. It had you traveling all across America as you waged war against the police, the army, and eventually “Majestic” which is a CIA clone minus the name. The game was a blast back when it released in 2005; however, times have changed a lot since 2005. Many people’s idea of what makes an amazing sandbox experience has changed significantly. Does the Destroy All Humans remaster bring the game forward into 2020 or is it just to far gone?

More Than Just A Fresh Coat Of Paint 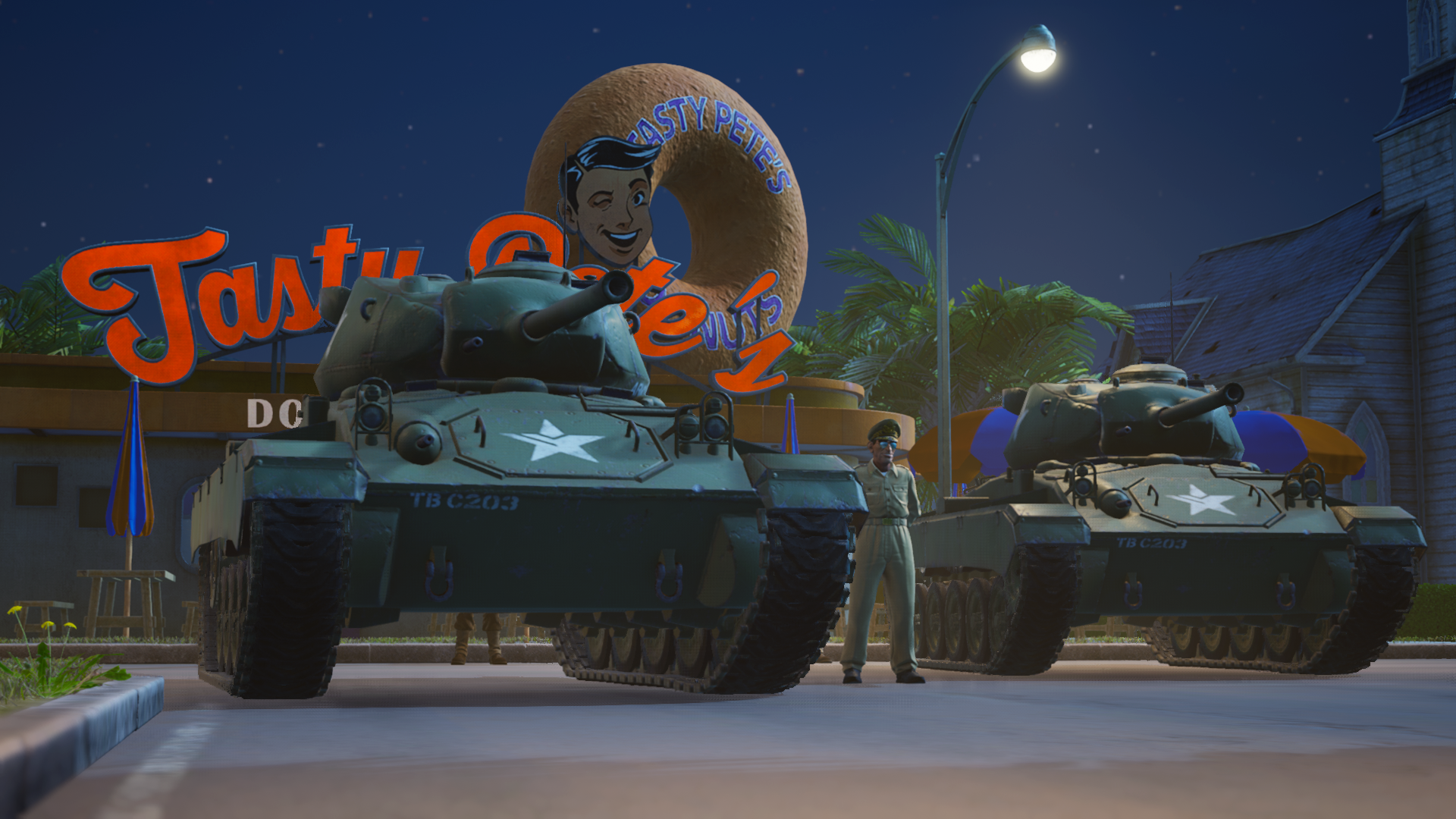 Too often with a remaster it feels like developers spend too much time on making the graphics look current generation. The other aspects of the game, such as the controls, suffer and the game’s overall performance feels antiquated as a result. Destroy All Humans does a fantastic job of bringing the game to a modern audience. Even if it doesn’t invoke nostalgia, you will be able to thoroughly enjoy yourself. The game looks fantastic, it still keeps some of its old school stylings, but leans more in a cartoony direction than the original. While some fans may take issue with this, I found it was a good choice. If they had simply tried to up the resolution of the original game, it would have look very dated. With its updated art style, it feels much more timeless.

One of the first things I noticed while playing the game, was how incredibly smooth the game ran. There were no frame rate hitches, while battling large amounts of human enemies. In addition the menus and weapon switching were silky smooth. The game lacked the “jank” that the original game had an abundance of. The game feels and plays like a game from 2020. Which may in itself sound like a minimum requirement, but it’s something many remasters don’t quite pull off. After so many cash grab remasters over the years, its good to see one that understands what makes the game so great. The gameplay is tight and feels exceptionally better then I remember from the original.

Sandbox games are much more intricate now than they were back in 2005. With games like Just Cause 4, withits weather systems, massive world, and interactivity its safe to say Destroy All Humans is a blast to the past. However, like games in the vein of GTA: San Andreas there is just something so great about the early worlds created in these sandboxes. I spent a large amount of time replaying some missions that were simply far too much fun. There is a solid variety of hilarious weapons that make combat addictive. I spent a solid 10 minutes giggling with the anal probe gun popping people’s heads and gathering DNA (which is used for upgrades). It’s absolutely childish fun: nothing more, nothing less. Using your telekinetic powers to fling enemies into each other, or using random farmyard animals as deadly missiles left me in stitches. 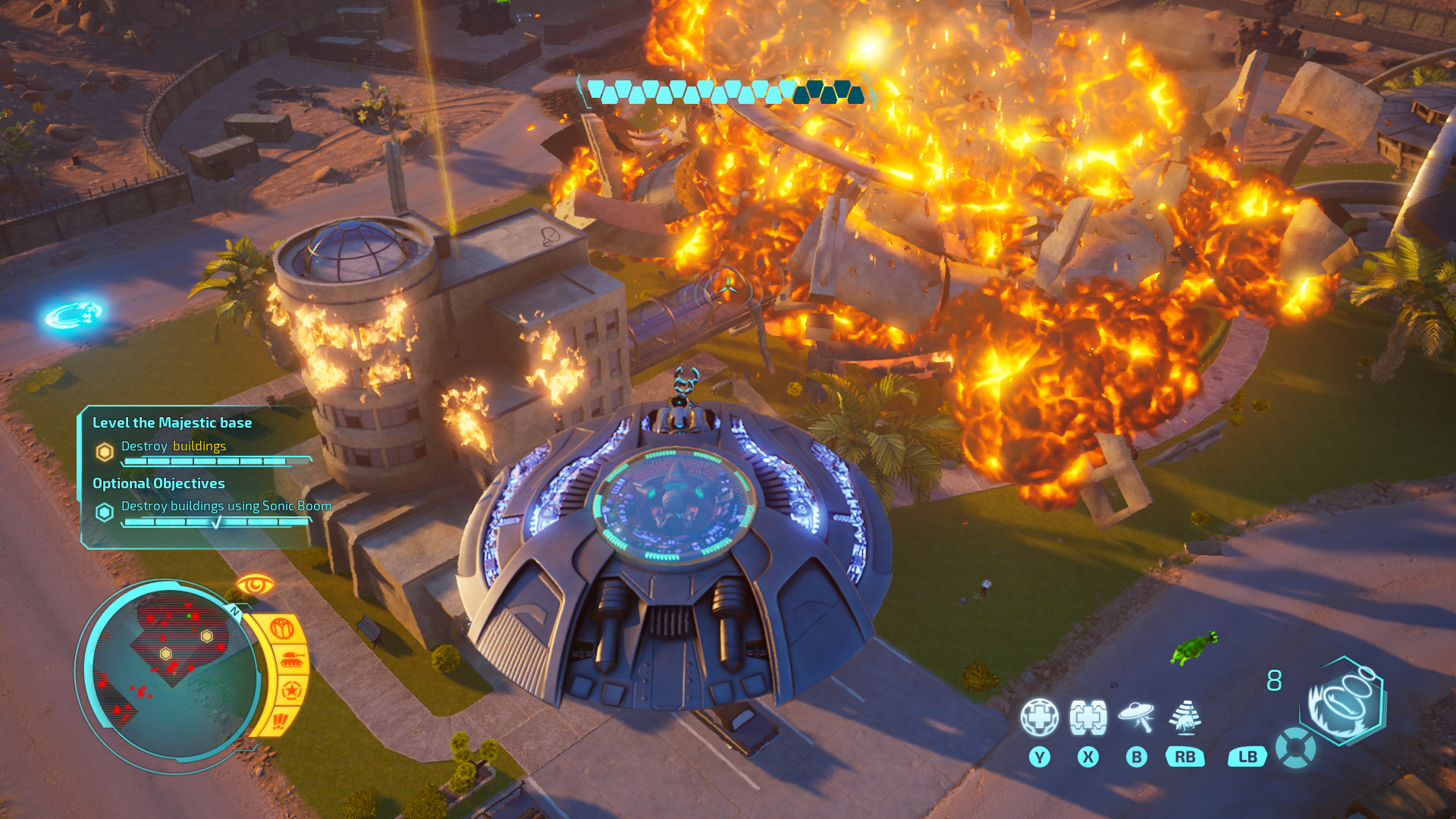 Not only is the basic combat rewarding and hilarious, but there is also aerial combat in the game as well. Now as a person who is downright terrible at flying in 99% of games, I can hear your groans. Aerial combat can be a game’s most irritating sections, especially if it feels like its added on as an afterthought. The saucer sections are just as much fun as your encounters on the ground. The saucer controls smoothly, and the controls are very intuitive. In a matter of minutes, you will be flying through fields and cities, burning them to the ground, and abducting humans.

Story Sets Up The Humor

The blend of missions through the game varies between a handful of mission types. You have saucer focused missions, wave defense, and simple destruction missions, in which you will do as much damage as you possibly can. However, the game really shines in its stealth missions. In these, you take on the appearance of a human through a “Bob” hologram. You will be trying your best to blend in with the rest of the average humans while interacting with NPCs. Some of the dialogue choices are absolutely absurd. Impersonating the mayor of a small rural town and convincing them that the strange occurrences in the town were because of the quote “filthy commies” was amazing. 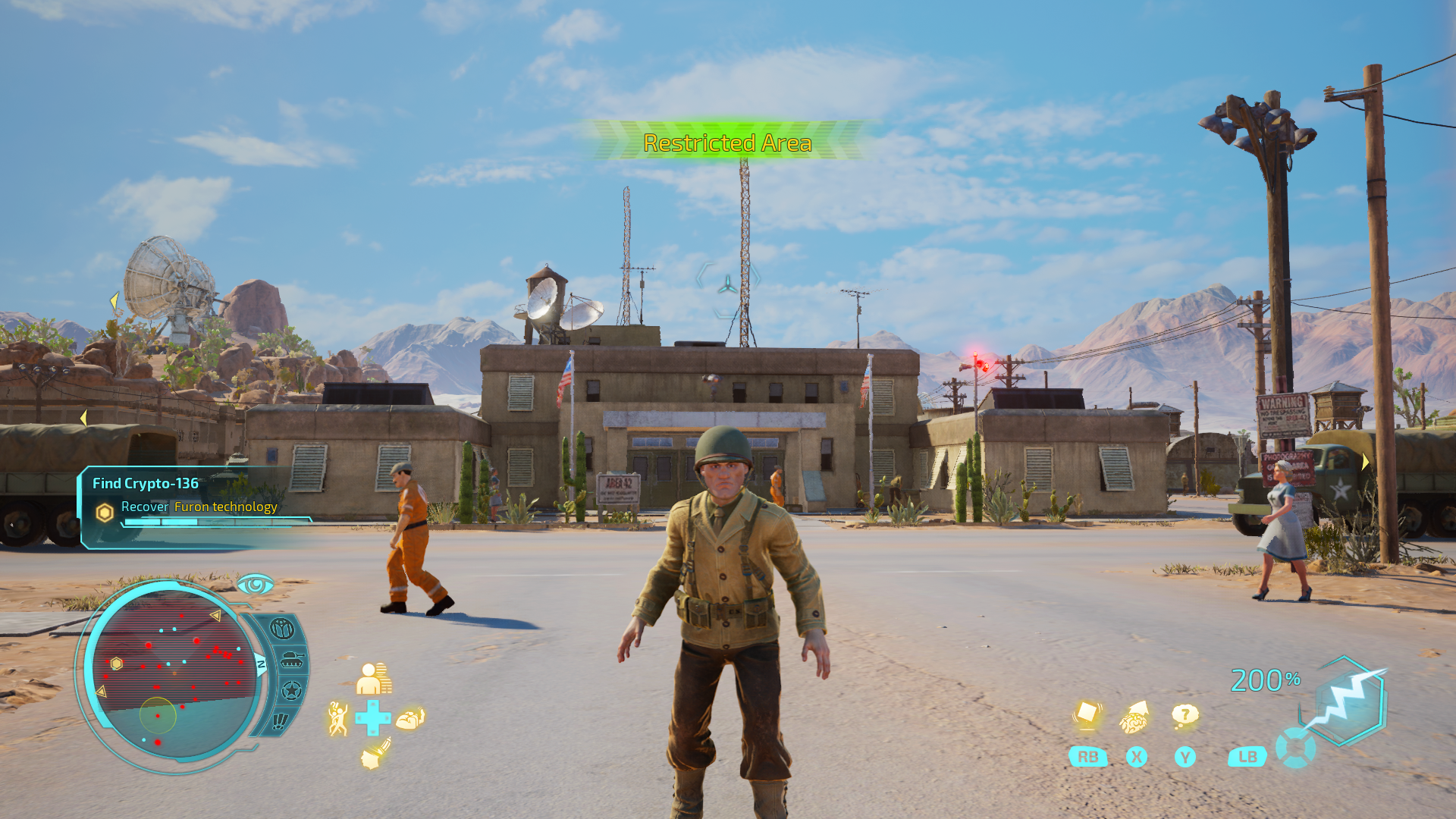 Destroy All Humans is all about the gameplay, the story is an afterthought. You are not eagerly waiting until the next cutscene in order to find out what happens next. With this being said, the time setting and the humor that is reason enough to pay attention. Hearing how paranoid and crazy cold war America could be was hilarious. For the first half of the game, you are constantly referred to as a “filthy little commie” by police and military forces. The references to the reds, Nixon, and pop culture from the era really sells the B-movie vibe of the game. This is especially true for the shady Majestic branch of the government who you tangle with very early on. Majestic is pushing for mind control via the TV, radios, and transmission similar to conspiracy theories about the CIA in the ’70s. While the game is obviously not a piece of history, it understands exactly the vibe it is aiming for.

While I had an absolute blast playing Destroy All Humans there are a couple of nitpicks, and issues I believe people should be aware of. While I have spoken at length about how much I have enjoyed the humor of the game. It is certainly not for everyone. What I mean by this, is that what was funny back in 2005 might not be as funny to some players in 2020. While I didn’t find anything myself that was abrasive, I know others might find it a major turn off. I had some audio issues as well, where during dialogue cut scenes the voice tracks would desync from the animations. This only happened a few times but happened more consistently closer to the end of the game. Hopefully, it is something that will be fixed with a patch.

One final point worth mentioning is something I have spoken of prior. This game, even though it’s remastered, is from 2005. While many aspects of the game aged naturally well or were tweaked during the remastering stage, it still suffers from some of the horrible things that sandbox games from that era were infamous for. One of the most shocking ones that I had honestly forgotten, was heading outside the map. During a particular moment of a saucer mission, I was evading a handful of tanks who were bombarding me. Then I get a glaring notification from the alien overlord that I was exiting the mission area. I quickly made a straight shot back into the map which led to me exploding in a fiery ball of flame. It’s small things like that which some players may find incredibly annoying.

Destroy All Human’s remaster is a love letter to the original game. From its abrasive humor to its open sandbox destructible world. The game is an absolute blast front to back. Whether you played 15 years ago or if you are looking for a more condensed and focused experience after completing your 19th open-world action RPG. Crypto-137 is back and he is ready to probe, explode, and make off-colored one-liners.